Everton's English striker Dominic Calvert-Lewin, 22, is ready to commit his future to the Toffees by signing a new long-term contract until 2025. (Times - subscription required)

Everton are in talks to sign Lille's Brazilian centre-back Gabriel Magalhaes, 22, who was linked with Arsenal and Tottenham Hotspur in January. (Independent)

The Toffees are also in the race to sign Celtic's Odsonne Edouard, 22, after conducting several scouting trips to see the France Under-21 forward. (Mail)

Who will come out on top in Manchester derby?

It's time for the Premier League predictions with singer Tom Grennan...

The Gunners are interested in bringing in Gent's 20-year-old Canada forward Jonathan David if Gabon international Pierre-Emerick Aubameyang leaves in the summer. (Mirror)

Manchester United's 30-year-old Nigerian striker Odion Ighalo, who is on loan from Chinese Super League side Shanghai Shenhua, could be offered a permanent deal at Old Trafford. (Mail)

Chelsea are considering a move for Trabzonspor's 23-year-old Turkish goalkeeper Ugurcan Cakir - who has also been linked with Liverpool - as a replacement for Spaniard Kepa Arrizabalaga, 25. (Fotospor, via Express)

The Premier League's homegrown player rule could interrupt Liverpool's plans to bring in a number of targets in the summer, including RB Leipzig's Germany forward Timo Werner, 24. (Liverpool Echo)

The French Football Federation has received written confirmation from Paris St-Germain that they do not want their France striker Kylian Mbappe, 21, involved in this summer's Olympic Games in Japan. (ESPN)

Arsenal and Everton both missed out on the chance to sign Napoli's Belgium striker Dries Mertens, 32, in the transfer window, with a release clause for foreign clubs only expiring on 10 January. (Star)

Leicester City have been linked with a move for 25-year-old Marseille's French midfielder Morgan Sanson. (Jeunes Footeux, via Leicester Mercury)

Barnsley head coach Gerhard Struber is confident that former England Under-20 midfielder Alex Mowatt, 25, will sign a new deal in the next few days. (Yorkshire Post) 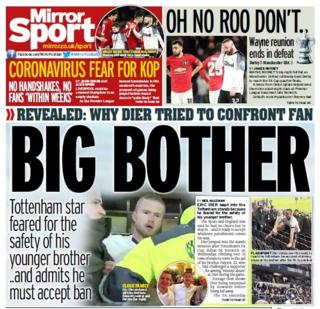 In the Daily Mirror, "Big bother"