Manchester City will make an improved bid for Inter's Slovakia defender Milan Skriniar, 25, this summer, having already failed with an offer of 60m euros (£52m). (Calciomercato - in Italian)

Arsenal could be forced to sell captain Pierre-Emerick Aubameyang, 30, this summer because of his wage demands. The Gabon striker is in talks over a new contract and wants £300,000-a-week. (Mail)

Juventus are willing to offer Real Madrid boss Zinedine Zidane a £7m deal to lure their former player back to take charge at the end of the season. (Mail)

Who would you include from the Blues and the Toffees?

Young Chelsea and Scotland midfielder Billy Gilmour, 18, is a target for Real Madrid and Barcelona. (Star)

Chelsea striker Tammy Abraham is targeting a return to action from ankle trouble this month and is hopeful of being fit for England's friendlies against Italy and Denmark. (Evening Standard)

Bayern Munich and Borussia Dortmund are both interested in signing Belgium right-back Thomas Meunier, 28, when his Paris St-Germain contract expires at the end of the season. (Goal)

Former Manchester United midfielder Nani told Portugal playmaker Bruno Fernandes that he should snub Manchester City in favour of a move to Old Trafford when the 25-year-old was considering leaving Sporting Lisbon. (Star)

Brentford's English striker Ollie Watkins, 24, says his "dream" is to play Premier League football with the Bees next season - but left the door open to a move should they fail to get promoted. (Evening Standard) 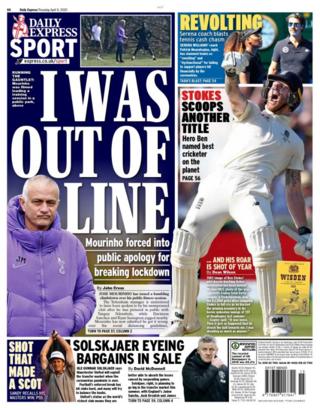