League One leaders Raith Rovers returned to winning ways with a 2-1 victory over Forfar Athletic.

Falkirk remain just a point behind in second place after a brace from Declan McManus helped secure a 3-0 home win over Peterhead.

Third-placed Airdrie beat East Fife, who had a man sent off, 1-0 at the Excelsior Stadium.

Clyde chalked up a third straight win as they saw off Dumbarton 2-0, and Montrose beat Stranraer 4-1.

After suffering a shock defeat at Dumbarton last weekend, Raith Rovers had drawn 1-1 with promotion rivals Falkirk on Tuesday.

John McGlynn's side were set on their way by an early goal from Daniel Armstrong after nine minutes and wrapped up the points when substitute John Baird slotted in a second with 14 minutes left.

Falkirk took an early lead in the ninth minute against Peterhead through co-manager Lee Miller and McManus converted a second from the penalty spot in the 25th minute.

Striker McManus - who had found the net in each of his last three matches to move past 20 goals for the season - hit a fine third on the hour with a dipping free-kick.

Dale Carrick put Airdrie ahead in the 16th minute at home to East Fife, knocking home a rebound after his penalty had been saved.

The visitors finished the match with 10 men when midfielder Ross Davidson was sent off for a second yellow card deep into stoppage time.

In-form Clyde were ahead against Dumbarton through David Goodwillie's close-range finish four minutes into the second half. Substitute John Rankin scored a second in stoppage time.

The Blues were level in the 65th minute when Montrose goalkeeper Allan Fleming spilled a shot from Cameron Elliot into his own net.

With 15 minutes left, the Gable Endies got themselves back in front when substitute Craig Johnston knocked in a rebound.

Johnston made it 3-1 in stoppage-time, with Liam Callaghan then adding a late fourth to compound Stranraer's misery. 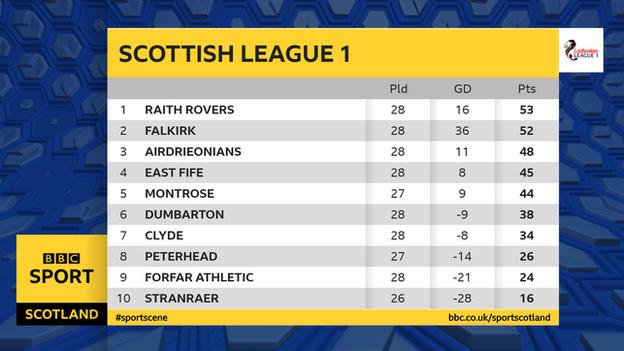