Cove Rangers maintained their 10-point lead in League Two with a 3-2 win over bottom side Brechin City.

Second-placed Edinburgh City kept up the pressure with a 3-0 home win over struggling 10-man Albion Rovers.

Queen's Park had Craig Slater sent off in stoppage time and slipped to fifth following a 0-0 draw at Stenhousemuir.

Elgin moved up to fourth with a 3-1 victory against Stirling Albion, while Cowdenbeath remain third despite being held to a goalless draw at Annan.

A the Balmoral Stadium, Mitch Megginson opened the scoring after 13 minutes from the penalty spot and netted the second three minutes after the break.

Jamie Masson made it 3-0 six minutes later before Martin Scott pulled a goal back just past the hour and then added a late penalty, but the home side hung on for the win.

Albion Rovers who were reduced to 10 men just 13 minutes into their defeat to Edinburgh City. Nicholas McAllister was shown a straight red card after conceding a penalty, which Blair Henderson converted.

Danny Handling got Edinburgh's second with 65 minutes gone and, two minutes later, Alex Harris got the home side's third to complete the scoring.

David Wilson equalised six minutes later but Kane Hester and an Archie MacPhee penalty had the home side well in control before the break and they went on to claim all three points. 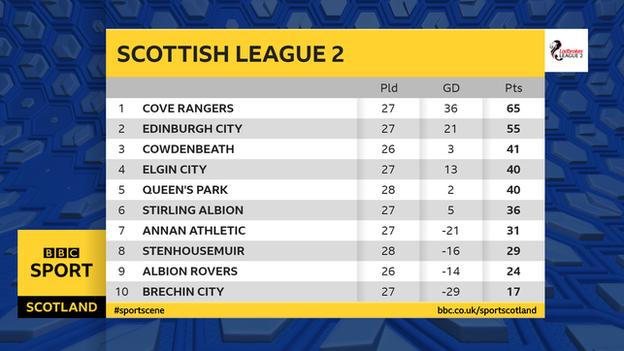