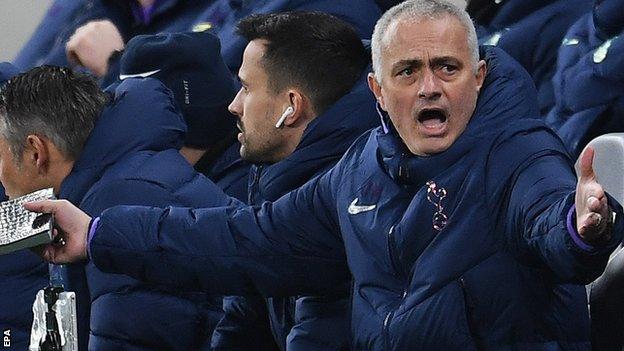 As the dust settled on Tottenham's 1-1 draw at Burnley, a rather surprising statistic came to light.

The point at Turf Moor was Jose Mourinho's 27th as Spurs manager. Since he was appointed as Mauricio Pochettino's replacement in November, only Liverpool and Manchester City have accumulated more.

By that assessment, the Portuguese is doing a pretty decent job.

When Mourinho was condemning the first-half performance of Tottenham's £53.8m record signing Tanguy Ndombele, it was devastating and brutal. But it also felt like a diversionary tactic after another game Spurs had failed to win.

It is now five matches since they last tasted victory, their worst run since the autumn of 2016. Unless they go to Germany and overturn RB Leipzig's one-goal advantage in their Champions League last-16 tie on Tuesday, it will be another campaign without a trophy.

It will also be only the third time since 2003 that Tottenham will have ended the season without reaching the quarter-final of a cup competition.

Now eighth, four points behind fourth-placed Chelsea having played a game more, qualification for next season's Champions League is looking a tough ask.

Such statistics fuel the view of those who believe Mourinho is a busted flush and that Tottenham chairman Daniel Levy made a major mistake in appointing him.

But Tottenham fans who pay to watch their team every week are somewhat more forgiving.

One of them is Michael Nunes, who first started following the club in the late 1960s.

"The jury is still out on Jose but you have to give him a chance," he said. "He needs at least one close season to bring some players in.

"The thing is when the club got to the Champions League final last season, it was great. We had a fabulous time in Madrid but when you step back and look at it, the club was not ready, and since then, it has gone downhill fast."

It could be argued the trouble began before that, on Tottenham's last visit to Turf Moor in February 2019.

Had the visitors won that day, they would have been two points behind leaders Liverpool. But they didn't. They lost 2-1.

From that day to this, Tottenham have played 42 times in the Premier League. They have won 16, lost 14 and drawn 12. By any measure, Tottenham have been distinctly average for over a year now.

Jeff Brova, another fan who has been following the club since the 1960s, feels chairman Levy is to blame.

"I think he only cares about getting people into the stadium," he said.

"He didn't sign a striker in the summer when it was obvious we needed one. The football hasn't been great recently but the investment in the squad was not made when we needed it.

"We have had chances to win trophies in the last few years and not taken them and now there is very little optimism."

Mourinho has not historically been one for optimism.

He does polarise opinion though. And those who have little time for the 57-year-old dismiss Tottenham's injury issues and say he is using them as an excuse.

Those who get to know Mourinho properly tend to judge him less harshly. At Tottenham, he is liked by those who have to deal with him regularly and see a humorous side that is not on public show very often these days.

And it is hard not to feel there is substance to Mourinho's view of his situation given he is shorn of more than just Harry Kane and Son Heung-min, his two major goal threats.

"With the offensive volume of the second half do you think Harry Kane doesn't score today?" he said. "What I call the box sharks, the guys who smell blood, would score - simple as that.

"I don't think this is Tottenham. Every team in the world, even those who have crazy squads, when you lose, for three or four months, your goalkeeper, your two strikers and two top scorers and a midfield player like Moussa Sissoko, you feel it. Imagine Liverpool without Salah and Mane for four months.

"We are improving in some aspects even without these players. This is a team that couldn't win an away match in the Premier League when I arrived. For one year it couldn't cope with certain matches and certain atmospheres and certain styles of play.

"Our results away are not phenomenal but we have three victories and three draws. There are things that are very difficult to change, especially the mentality, but I loved their mentality [against Burnley]."