England midfielder Jesse Lingard, 27, is set to be sold by Manchester United this summer. (Goal)

Chelsea's Brazilian winger Willian, 31, admits he does not know where his future lies, with his contract up at the end of the season and talks over a new deal at an impasse. (Evening Standard)

Willian's wife Vanessa Martins has suggested that her husband may be on the brink of ending his seven-year stint at Chelsea. (Mirror)

Barcelona want to commit Germany goalkeeper Marc-Andre ter Stegen, 27, to a new contract and are confident of doing so despite interest from other teams, including Chelsea. (Sport)

Former boxing champion Floyd Mayweather has suggested that he would be interested in buying Newcastle. (Newcastle Chronicle)

Key questions about what lies ahead

Real Madrid's former Chelsea goalkeeper Thibaut Courtois, the 27-year-old Belgium international, is a major doubt for his club's next two games - including the Champions League last-16 second leg with Manchester City - because of an adductor muscle injury in his left leg. (ESPN)

Borussia Dortmund's German midfielder Emre Can, 26, has revealed that he turned down offers from three Premier League clubs, including Manchester United, out of loyalty for his former club Liverpool. (Mail)

Manchester United striker Anthony Martial, 24, says he is focused on a spot in France's Euro 2020 squad, but only after he has helped his club achieve Champions League qualification this season. (RMC Sport, in French)

Burnley manager Sean Dyche believes English midfielder Dwight McNeil, 20, would be getting much more attention if he was playing for a more fashionable club. (Lancashire Live)

Leicester striker Jamie Vardy says he would be open to a return to the England squad for their Euro 2020 campaign. The 33-year-old all but retired from international duty after the 2018 World Cup. (ESPN)

RB Leipzig's Germany striker Timo Werner, 21, is torn between Liverpool, Manchester City and Manchester United as he contemplates his next move. (Mail) 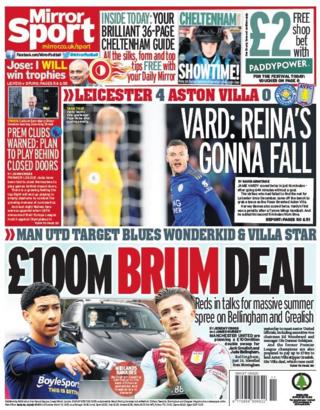