The Scottish football season has been suspended until further notice amid the coronavirus outbreak, but what happens now?

SPFL chief executive Neil Doncaster said it was "neither realistic nor possible" to continue with games so when will the season recommence, if it does at all?

Who would be crowned champions? Who would be relegated? And what are the financial implications?

Why are we stopping?

The Scottish governments have advised events of more than 500 people should be cancelled in order to limit the spread of the virus and to ease the burden on the emergency services.

Many games abroad have been played behind closed doors, with the second leg of Rangers' Europa League last 16 tie with Bayer Leverkusen initially planned to go ahead without any fans present.

However, Uefa have now taken the decision to postpone all games due to be played next week, and the SPFL and Scottish FA have followed suit by calling a halt to all games under their jurisdiction.

How long are they stopping for?

"Until further notice" is all that they will say. It very much depends on how the illness escalates.

The UK are currently entering a "delay phase", which aims to lower the peak impact of the virus and push it away from the winter season - when pressures on the NHS are more acute because of issues including seasonal flu.

Not only do large scale sporting events bring big crowds, it also puts extra demands on the police and medical services who, at the moment, will already be under strain.

What happens to the football season?

That has not been decided. Celtic are 13 points clear at the top Scottish Premiership, and manager Neil Lennon believes if the season cannot be completed, his side should be awarded the league title.

"We would be the champions and rightly so," said Lennon. "Most of the other leagues, like Dundee United, they would have to be promoted as well.

"Certainly, if you are talking about the Armageddon of the league being cancelled or stopped, it should go on the average points total which would make us clear champions and rightly so.

"We are over 30 games in to the season, they are not going to take that away from us."

The SPFL have yet to comment on what might happen should they not be able to fulfil the fixtures.

What happens to the clubs? 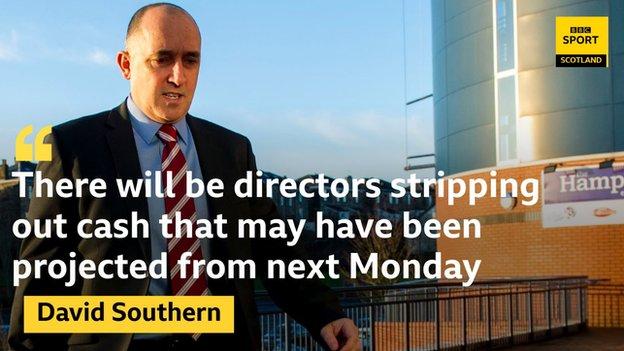 No games means no gate receipts, which SPFL chief executive Neil Doncaster has admitted could have "dire consequences" for teams across Scotland.

Scottish clubs rely heavily on ticket sales, with Uefa's latest benchmark report revealing that 43% of the Scottish top flight's revenue was made up of gate receipts in 2018.

And the league body warned clubs earlier this week that there were no cash reserves to help them in the event of matches taking place without spectators.

Former Hearts and Dundee United managing director David Southern told BBC Scotland's Sportsound: "No one can deny that the cash strain that certain clubs will face will be quite severe."

"There will be directors in boardrooms now stripping out cash that may have been projected from next Monday. You have no income coming in but have a number of fixed costs."

Asked whether the lack of games could lead to clubs going to the wall, Southern said: "I hope not. But the longer it goes on, the more it becomes a possibility.

"Most Scottish clubs are owned and run by business people and supporters that have the good of the club at heart.

"So you'll probably find that some of the reasons that the directors are sweating at the moment is because they'll have to dig even deeper in to their own pockets to subsidise shortfalls in cash."

For now, that is uncertain. Uefa have scheduled a video conference meeting with all of its 55 member associations on Tuesday to discuss European football's response to the outbreak.

Scotland's Euro 2020 play-off semi-final against Israel at Hampden on 26 March is in significant doubt, with Fifa recommending that all international games are cancelled in March and April.

The tournament itself could be moved to next summer, delayed or even cancelled altogether.

Norway, who are also in the play-offs, have already indicated they will not play their semi-final with Serbia, meaning even if Steve Clarke's side did play and beat Israel it is unknown when the final would be.

What about fans who have bought tickets?

Keep hold of those tickets until a new date for matches is announced, is the advice.

Adam French, consumer rights expert at Which?, said: "If you're unable to make it to a game once it's been rescheduled, then you'll be entitled to a refund.