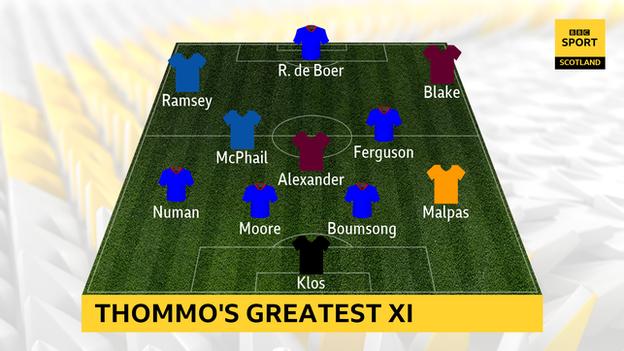 Steven Thompson played on both sides of the border, with nine major honours at Rangers, a Scottish League Cup win with St Mirren, an FA Cup final with Cardiff City, and promotion to the English top flight with Burnley among his career highlights.

Here, the 16-cap former Scotland striker picks the greatest XI of his team-mates.

I only played with him for about a season and a half at Dundee United. But in terms of how to read the game, positional sense and the advice he gave to me as a young footballer, it was invaluable.

I've rarely played with a more aggressive, competitive defender than Moore. He was hard, brave, dirty, uncompromising. To play against him was tough; to have him in your team was brilliant. What a player he was.

Boumsong was incredibly quick. He went on to win 27 France caps and play for Juventus. I only saw him getting roasted once - when we played Auxerre, their striker absolutely destroyed him that night and we lost 2-0. But Boumsong was a classy operator.

Netherlands international and just sheer quality. A Rolls-Royce of a player.

Ferguson's awareness, composure, his quality on the ball, means I just have to pick him.

Alexander is the midfield sitter. In the season we got promoted with Burnley, he played 66 games, was about 37 at the time and never had less than an eight out of 10 performance. He was absolutely phenomenal. His attitude and application were better than anything I've seen.

I played with Ramsey for a season at Cardiff before he went to Arsenal and this guy was just on a different planet. The likes of Gavin Rae and Stephen McPhail, when they were against him in training, used to say: "We can't get near this guy." He always received the ball in space and was a move ahead all the time.

Blake is probably the most skilful player I ever played alongside. He could do things with a ball that I gasped at. He used to turn defenders inside out. The season we got promoted, he was unbelievably good.

Technically, he was in a class of his own. By the time he joined Rangers he was 30 and couldn't move his knee, but he didn't need to because his brain was just operating at a higher level than everybody else's.