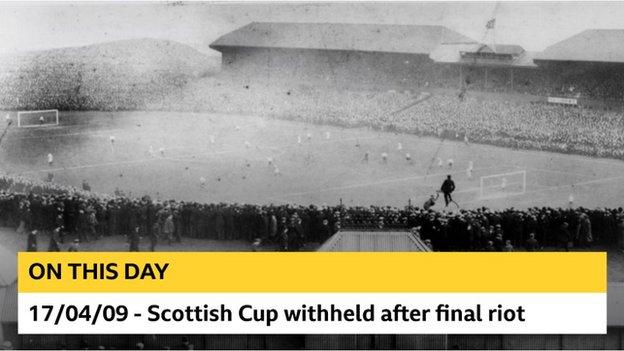 Mob rule. A bonfire on the pitch. A two-hour riot, and the trophy withheld. Even by Old Firm standards, the 1909 Scottish Cup final was bedlam.

The sides couldn't be separated in 90 minutes and remained deadlocked following a replay, after which all hell broke loose at Hampden Park.

It was an unprecedented act of hooliganism in Scottish football that left scores of people injured.

Here, Richard McBrearty, the curator of the Scottish Football Museum at Hampden, recounts one of the most unsavoury episodes in the game's history.

The two clubs were starting to emerge as the giants we know them as today. The term 'Old Firm' actually comes from this early 20th century period as Rangers and Celtic were now box-office attractions. They were beginning to stand out because they had the biggest crowds, the best players and were on the cusp of dominating Scottish football.

They were also playing in finals on a regular basis so they were making money, particularly when facing each other. The "firm" relates to being like a business and the "old" clubs were rising again to make more money.

But the religious element of the rivalry hadn't developed to a great extent yet. So sectarianism wasn't a key factor on this occasion. Also, there was no segregation - the fans were mixed together. You would have a big number of supporters from other clubs because the cup final and Scotland v England were the two biggest events that came to Glasgow.

So it wasn't two sets of fans fighting each other and carnage ensuing - it was basically a mob fighting the authorities because they felt they were getting ripped off. It was mob rule.

The first game was a close affair, with Rangers winning 2-1 late on and then an own goal forcing the replay. The second, with 60,000 fans packed inside Hampden, ended 1-1. It was the first time a replay had been drawn. And that's when confusion led to chaos.

The rules were simple - another replay was to be held. But for whatever reason, the crowd believed it was going to be played to a finish.

The players were unsure, too. Crucially, they hung back at the end of the 90 minutes. They were milling around and didn't know if they were to play on. It was only when the referee left the pitch that they eventually departed and the officials came out to remove the corner flags. That's when the crowd realised the game was finished.

This riot was completely unprecedented. And it really wasn't expected. There wasn't a large police presence at the game and they were simply overwhelmed.

Thousands of incensed fans surged on to the pitch quite quickly. There were scuffles, the police responded, and then it just kicked off. Carnage. And it lasted for two hours, which is quite incredible.

The police called for reinforcements. But even then they just didn't have the numbers to quell thousands of fans. They were basically fighting battles in lots of different areas on and around the pitch.

The crowd went from attacking the police to destroying elements of the stadium. They ripped up the pitch, tore down the goals and set them on fire. The fencing around the track and the pay boxes - old-fashioned turnstiles - were destroyed and burned as well.

The fire brigade turned up and got pelted with stones and bottles. They pulled out the hoses to try to douse the fires, but the rioters grabbed the hoses and the first one got thrown on a bonfire on the pitch. The rest were cut so they couldn't be used.

Police, firemen and fans were all on the casualty list. It was a grim scene with some really bad wounds. There was no final figure for the injuries, simply because some people walked away, while the more serious cases were treated in hospital. One eye-witness account estimates 130 people were injured.

In the aftermath, there was an inquiry and - much like in the current environment - everybody blamed everyone else. Queen's Park, the Hampden owners, had a lot of damage to their stadium. The Scottish FA, as organisers of the competition, were ultimately liable.

There was a compromise between the clubs and the Scottish FA to compensate Queen's Park with hundreds of pounds to repair the stadium.

It remains the only time that the competition has been played and trophy not been handed out. On the plinth that comes with the Scottish Cup, a large plaque bears the name all the winners. For 1908-09 it simply says: Cup withheld.