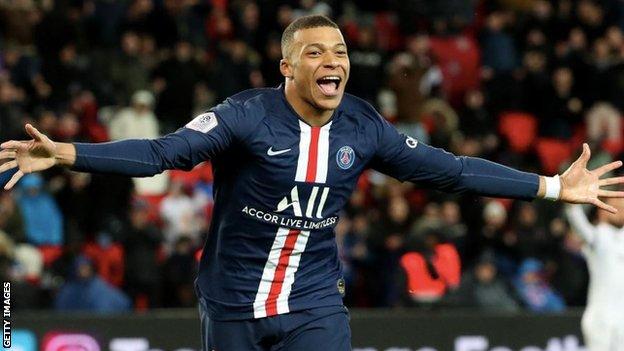 "It won't be possible to do sport in covered areas, nor practice team or contact sports," said France's Prime Minister Edouard Philippe on Tuesday.

"Events gathering more than 5,000 participants cannot be staged until September."

And so were skewered the French Football League's (LFP) hopes of professional football returning on 17 June, a full month after France is supposed to ease the lockdown restrictions that for six weeks have suffocated but not stamped out coronavirus.

So what happens now?

The clamour to claim the 15m euros (£12.91m) teams get just for qualifying for the Champions League group stage is a pretty penny that has - predictably - already seen things get ugly.

No sooner had the Ligue 1 season been suspended in mid-March than Lyon president Jean-Michel Aulas and his Marseille counterpart, Jacques-Henri Eyraud, launched into an unsightly public spat.

Aulas claimed last season's final placings should be used to determine next season's European participants; Eyraud disagreed. Aulas' Lyon side finished third in 2018-19, Marseille were out of European competition in fifth. Guess which team was in seventh and whose in second when play was halted this term?

Aulas' suggestion is not one of three possible scenarios set out by an LFP working group, though. They are:

The solution is now likely to be decided by a general assembly vote of France's professional clubs.

In all three cases, the current top four would stay the same, happily fulfilling Uefa's hope that the 2020-21 European participants would be decided on "sporting merit" - Paris St-Germain as champions and Marseille would qualify for the Champions League group stage with Rennes heading into the third qualifying round.

However, if the two Europa League places available from the domestic cup competitions are given to the teams finishing fifth and sixth in the league, expect squabbling: Lyon, Montpellier, Reims, Nantes and Nice would all have a claim.

While the third promotion/relegation place - decided by a play-off in normal circumstances - is likely to not be attributed, L1 strugglers Toulouse and Amiens are set to be relegated, replaced by Ligue 2 top two Lorient and Lens.

Winning a ninth league title in these circumstances will sting, especially as Thomas Tuchel's men were 12 points clear and would have matched arch-rival Marseille's nine French crowns at a canter.

But they also wanted to equal Marseille in another way, by becoming France's second Champions League winner.

After getting over the formidable obstacle of Borussia Dortmund and clearing an even bigger psychological barrier to reach the quarter-finals for the first time in four attempts, PSG were looking good.

Neymar - key against Dortmund - was playing well and, crucially, for the team, Kylian Mbappe and Angel di Maria were in sizzling form.

For the first time since Qatar Sports Investments took over the club in 2011 and stated they wanted to claim European football's premier prize, PSG looked in a promising position to do it.

"If it's not possible to play in France, we'll play our matches abroad," PSG chief executive and chairman Nasser Al Khelaifi said of the Champions League on Tuesday.

Bold and bullish in the boardroom then, but the reality on the pitch could be very different.

If Uefa manage to stage the remaining ties, Tuchel would have to mould his side into shape - mentally and physically - for potentially five top-grade matches with no competitive football in their legs between now and the end of August when the Champions League final might be staged.

Should the other leagues restart, PSG would be at a massive disadvantage.

Mbappe, Neymar and the mercato

The Spanish press have been getting excited over the possibility of seeing both of PSG's crown jewels in La Liga next season. Mbappe has made little secret of his love of Real Madrid and hero-worship of manager Zinedine Zidane, while Neymar had already pushed hard to move back to Barcelona last summer.

Will they go this time? Unlikely.

Mbappe will be in a stronger bargaining position in 2021 with a year left on his contract and - according to recent reports in France - the Emir of Qatar's "will" is for the World Cup winner to stay.

The same goes for Neymar, another favourite of the Gulf state's ruler, and he too has another two years on his PSG deal.

Most significantly, the tears that flooded from him after qualifying behind closed doors against Dortmund, and the acclaim of the fans outside the Parc des Princes' locked gates, suggested his Nou Camp nostalgia is no more.

A thornier question for other less financially muscled French clubs will be how to hold on to their best players in the summer transfer window, if there is a mercato, as it's known in France.

"This stoppage raises other problems, one of which is decisive, the economic one," said Marseille boss Andre Villas-Boas who, while hailing a "logical" decision by the government, added soberly: "The survival of the clubs depends on it."

In France, arguably even more than anywhere else, the money is a pressing issue. The current TV rights deal is due to expire at the season's end with the new contract, largely financed by Mediapro, worth 60% more, tipping the Ligue 1 clubs' pot over the 1bn euros (£0.86bn) mark.

Clubs were desperate to finish the 20190-20 campaign though as they were reliant on the more than 200m euros due as the final slice of the cake broadcasters Canal+ and BeIN SPORTS had shared for the last four years. Most of that sum now looks highly unlikely to be paid.

With nearly 40% of Ligue 1 outfits' budgets coming from the TV deal, and Rennes currently the only top-flight side whose players have agreed to a wage cut, the future of some clubs is in the balance.