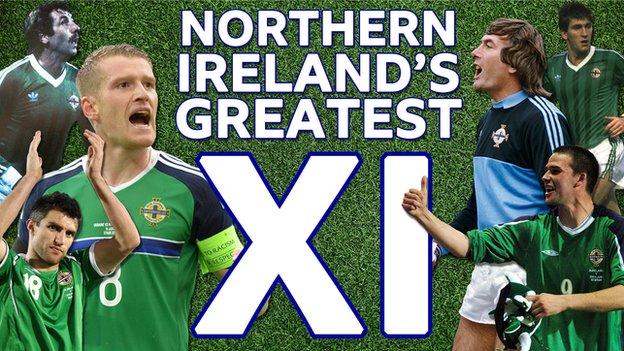 Football stats man Marshall Gillespie selects his ultimate Northern Ireland team from the last half century, but there are a few notable absentees.

It was a tough assignment with so many great players donning the great shirt and bringing pride to 'our wee country', including two World Cup appearances and reaching the Euro 2016 finals.

Jennings, Best, Armstrong, Whiteside, Davis and Healy are all there but Sammy McIlroy and Alan McDonald miss out while there's not even a place on the bench for big Gareth McAuley, the hero of Lyon.

Marshall has gone for a 4-3-3 formation.

Was there ever any other contender for the number one spot?

Jennings' glittering career spanned an astonishing 23 years for club and country and in his prime he was quite rightly recognised as one of the greatest goalkeepers in the world.

While at Spurs he won the Uefa Cup, FA Cup and League Cup (twice) and lifted the FA Cup again in 1979 following his move to North London rivals Arsenal.

The Northern Ireland record cap holder played a total of 975 games at club level in England and was named Football Writers' Player of the Year in 1973 as well as picking up the PFA award in 1976.

Jennings performances against Spain in the finals of 1982 World Cup and the World Cup qualifying game against England at Wembley in 1985 are the stuff of legends and will live long in the memory of every Northern Ireland fan who witnessed them.

The quiet, unassuming Newry man finally hung up his gloves when he made his 119th and final appearance for his country against the Brazilians in the 1986 World Cup on his 41st birthday.

Jimmy Nicholl was Billy Bingham's regular right-back during the period in the 1980s which brought Northern Ireland two Home International Championships and back to back qualification for successive World Cup finals.

He was famed for his marauding runs down the flank, which were a trademark of his play throughout his career and began at Tommy Doherty's Manchester United.

In nearly 250 games for United he won an FA Cup in 1977 before moving on to Sunderland, Toronto Blizzard and Glasgow Rangers, where he collected a league championship medal under Graeme Souness in 1987.

Not renowned for his goal scoring, the only time he found the net for his country was a 25-yard screamer in an impressive 3-0 World Cup qualifying victory over Sweden at Windsor Park in 1980.

Surprisingly, Nicholl's final outing on the international stage was in the 3-0 defeat to Brazil at the 1986 World Cup Finals at the relatively young age of 29.

Jonny Evans may have made his Northern Ireland debut as an emergency left-back but since then he has matured into one of the most composed and consistent central defenders in the Premier League.

When Lawrie Sanchez gave the 18-year-old Manchester United player his first cap in the sensational 3-2 victory over Spain in 2006, it was clear for everyone to see that here was a star in the making.

However, it was at the heart of the Manchester United defence that Evans eventually made his name and in nearly 200 appearances for the Premier League giants he won three league titles and two League Cups.

Now at Leicester City, his presence in the back four alone emits calmness to those around him - his assuredness on the ball and timing of his tackles are qualities that have seen him develop into a truly world class player.

Evans was an integral part of Michael O'Neill's Euro 2016 squad and with 84 appearances to his name, and still only 32, he has every chance of becoming only the fourth Northern Ireland player ever to make it to a century of caps.

At both club and international level Aaron Hughes was a manager's dream, with a versatility which allowed him to play with confidence anywhere across the back four!

Although major honours eluded him throughout his 20 year career, during which he played a total of 676 games for eight clubs, he was awarded the MBE for Services to Football in 2020.

Hughes, who is the second most capped outfield player in Northern Ireland's history, initially announced that he was retiring from international football in October 2011, but manager Michael O'Neill persuaded him to reverse that decision when he took over the helm in February 2012.

The Cookstown native, who can count Newcastle United, Aston Villa and Fulham among his former clubs, went on to win a further 33 caps under O'Neill and also played in three of the four matches of Northern Ireland's Euro 2016 adventure.

Hughes, who skippered his country on 48 occasions, retired from football in June 2019 aged 39.

Mal Donaghy was coolness personified on a football pitch.

Dubbed the 'Quiet Man' of Billy Bingham's squad, the versatile performer never let his country down whether he was deployed as a left-back, centre-back or a midfielder.

Like Josh Magennis, Donaghy started life off as a goalkeeper playing for St Agnes in the Down and Conor League before being converted to an outfield player with POSC, Cromac Albion and then Larne.

A move to Luton Town followed in 1978 and subsequent high profile transfers saw him play with distinction for both Manchester United and latterly Chelsea.

He played in both the '82 and '86 World Cups but unfortunately he is perhaps best remembered for his unfair dismissal by the Paraguayan referee Hector Ortiz in the 1-0 victory over Spain in Valencia - a travesty if ever there was one.

Donaghy's final game for Northern Ireland came in June 1994 versus Mexico when he was just three months shy of his 37th birthday.

Steven Davis has been the driving force behind Northern Ireland's midfield now for over 15 years.

He may be in his 36th year, but the former Aston Villa and Southampton player still feels he has another qualifying campaign left in him, which is obviously good news for the new incoming manger.

Davis first captained his country during Nigel Worthington's reign and has now skippered the side on 65 occasions, more than any other player in Northern Ireland's history.

The Ballymena-born midfielder was pivotal in Northern Ireland successfully reaching the Euro 2016 finals in France, following in the footsteps of Danny Blanchflower (1958), Martin O'Neill (1982) and Sammy McIlroy (1986), who all led their teams to major tournaments.

A product of St Andrews Boys' Club, Davis only requires three more caps to overtake the legendary Pat Jennings and become known as one of the greatest Northern Ireland players of all time.

By the time Norman Whiteside was 21 he had already played in two World Cups.

He became an overnight sensation when manager Billy Bingham gave him his debut in the opening game of the 1982 World Cup, aged just 17 years and 41 days to eclipse Pele's record and become the youngest ever player to appear in the Finals.

After making his Manchester United debut at 16, his first full season at Old Trafford saw him go on to break further records by becoming the youngest player to score in both the League and FA Cup Finals at Wembley.

Although a prolific goalscorer during his schoolboy and youth days, Whiteside's strength and power eventually saw him revel in a midfield role for both United and Northern Ireland.

Of the nine goals he managed under Bingham, his most notable was without doubt his historic winner against over West Germany in a European Championship qualifier in Hamburg.

In 1986 Northern Ireland again qualified for the World Cup, this time in Mexico, with Whiteside scoring in the opening match, a 1-1 draw with Algeria in Guadalajara

After joining Everton in 1989, Whiteside was forced to retire two years later aged just 26 due to persistent knee problems.

Martin O'Neill's strong, purposeful running from midfield and overall determination made him a vital cog in Billy Bingham's successful side of the early 1980s.

The articulate Kilrea man won the Irish Cup with Distillery before embarking on a professional career across the water with Nottingham Forest in 1971.

Under Clough's guidance at the City Ground, O'Neill developed into one of the best midfielders in the First Division, winning a League title in 1978 and two European Cups in 1979 and 1980.

At the age of 30 O'Neill, who had now moved on to Norwich City, skippered Northern Ireland to World Cup glory in 1982 and was also a hugely influential figure in the side that just missed out on qualifying for the 1984 European Championships.

The curtain came down on O'Neill's international career when he won his 64th cap in a 2-1 World Cup qualifying win over Finland in November 1984.

Such was his impact at the 1982 World Cup finals he was also voted 'Best British Player' of the tournament ahead of more established household names from England and Scotland.

It shouldn't be forgotten though that the former Spurs striker scored crucial goals throughout his international career, none more so than the winner against Israel which ensured qualification for those finals in Spain.

Armstrong's power and directness caused problems for many defences during his nine-year spell in a green shirt and his final tally of 12 goals currently sees him in joint fifth spot in the all-time list of scorers for Northern Ireland.

At the age of 32 Armstrong made the last of 63 senior appearances for the national side as Northern Ireland went out in the group stages of the 1986 World Cup in Mexico following a 3-0 defeat to Brazil.

David Healy was without question the most naturally gifted goalscorer that Northern Ireland has ever produced.

From the day he scored two goals on his full international debut against Luxembourg in 2000, there never was any real doubt that he would eventually go on to become his country's all-time record marksman.

While Healy's goalscoring exploits for Northern Ireland are second to none, many feel he underachieved at club level with his most successful spell coming at Preston North End where he managed 45 goals in 156 games.

But when the Killyleagh man pulled on a green shirt though he was different class.

Healy, who is also the only Northern Ireland player ever to score two hat-tricks in different matches, earned iconic status when he scored 'that goal' against Sven Goran Erickson's England in 2005, but incredibly a year later he topped that by scoring a superb treble against a formidable Spanish side at Windsor Park.

During the Euro 2008 qualifying series Healy set a new record for most goals in a qualifying campaign when he hit 13 in just 12 matches to overtake the previous record of 12 set by Croatia's Davor Suker.

His 95th and final game for Northern Ireland came in a 3-0 home defeat to Israel in March 2013.

People may argue that George Best's career was over by the 70's but the fact remains that nearly half of his 37 caps for Northern Ireland came in that decade.

The boy from the Cregagh was only 24 when the Seventies arrived and five of his nine goals for his country came during that period.

The sublimely talented Best crammed more into his 10 years at Manchester United than most footballers do in their entire careers - winning two league titles, a European Cup and being crowned European Footballer of the Year.

Unfortunately that success was not replicated at international level and one of his greatest regrets was that he never got the opportunity to showcase his God-given talents at the finals of a major tournament.

The iconic Best may not have always produced his best form in a green shirt, but his ability to conjure up the unexpected with a flash of brilliance means no Northern Ireland XI, from an era, would be complete without him.

Do you agree with Marshall's picks? Who is unlucky to miss out? Let us know on social media!