The first-time volley, the overhead kick, the classic team move - these are the goals that stand out in the memory, but who has scored the greatest goal of the Premier League era?

That was the subject discussed by Gary Lineker, Alan Shearer and Ian Wright on the new Match of The Day: Top 10 podcast.

Shearer and Wright each made their own lists of the top 10 goals scored in the Premier League or FA Cup since the 1992-93 season - there's plenty of crossover on both lists and you can read what they thought of the 14 goals selected by the pair below.

To hear which 10 goals Shearer and Wright both chose for their final selections, make sure you listen to the podcast on BBC Sounds.

Meanwhile, here are the 10 in order, as selected by BBC Sport readers. 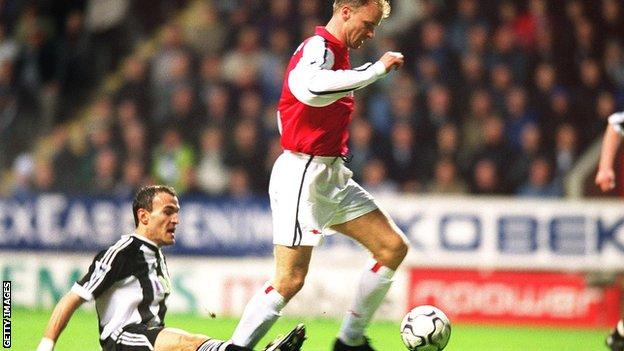 As Robert Pires fired in the pass into Dennis Bergkamp, the Dutchman spun the ball around defender Nikos Dabizas and ran around the opposite side of the defender with a pirouette before beating Shay Given.

Shearer: "No-one has ever scored a goal like that and I don't think anyone will ever score it again. He absolutely meant it, the touch, the technique and the finish was exceptional."

Wright: "The pass was behind him and he has to improvise, and because he was such a great technician, he scored one of the greatest goals I have ever seen. If he had a bad touch in training, everybody noticed, because he was so good." 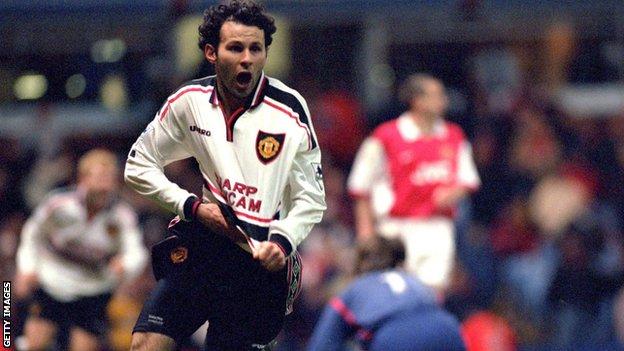 With the semi-final poised at 1-1, and just 11 minutes of extra time remaining, Ryan Giggs took on the entire Arsenal defence, jinking past four defenders before smashing the ball past a helpless David Seaman to send his side through.

Shearer: "It is such an iconic goal with his ability and the way he runs off and celebrates."

Wright: "It was the significance of it, and how that team refused to be beaten. Ryan Giggs came off the bench and Patrick Vieira gave the ball away, but I thought it was fine because he was still in his own half. Then he starts running and no one engages with him, and once he gets going he just gets through them. He had to go high to beat David Seaman and that is what he did. It's arguably one of the best goals in FA Cup history." 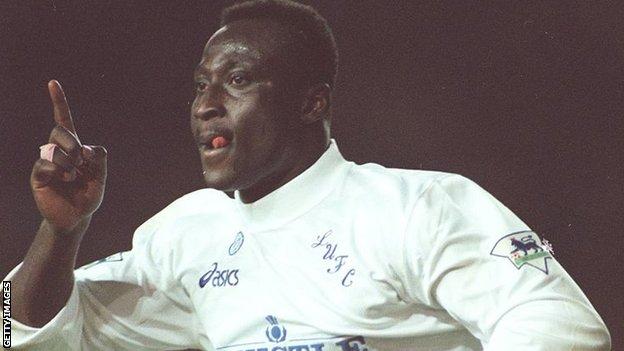 With the second half at Elland Road just five minutes old, Leeds took the lead through Tony Yeboah, who thundered a right-footed volley in off the crossbar, with a strike that tested the frame of the goal to its fullest.

Wright: "Leeds were an exciting team at the time. It was live on television, and the ball was coming down to him but he hit it so powerfully it went over David James and it was a beautiful strike of the football." 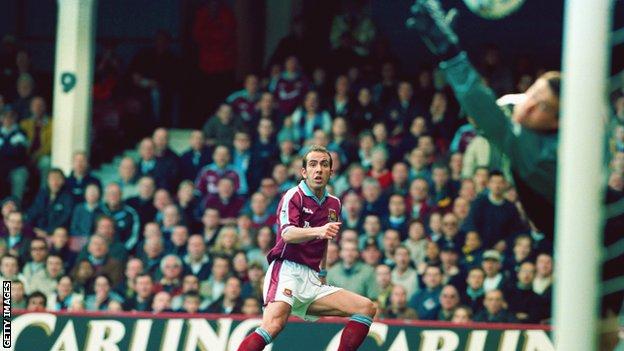 In a London derby between West Ham and Wimbledon, the Hammers' Trevor Sinclair floats a long ball into the box, which is acrobatically met by Paolo di Canio. The talismanic Italian pulls off a spectacular volley with both feet off the ground.

Shearer: "We talk about watching the ball and he has hit it with his right foot with the left off the ground. To get that connection, it was was an unbelievable volley."

Wright: "It was a goal we haven't seen before and we have not seen it since. That is why he has to be recognised for the audacity of the goal. With the right foot you could easily get it wrong, but he adjusted himself in the air."

With the ball headed just behind him, Southampton's Matt le Tissier had to improvise by flicking the ball up with his left foot, before lifting the ball over a second defender with his right and calmly slotting the ball past Mike Hooper. 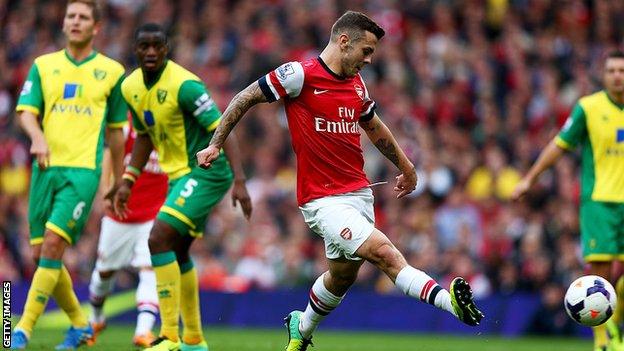 Jack Wilshere was the architect of a delicious opening goal against Norwich as he played a neat one-two with Santi Cazorla after picking up the ball deep inside his own half, before cleverly combining with Olivier Giroud and volleying in from close range.

Shearer: "It was a great team goal. Jack started the move inside his own half and then the passing, the movement and the way he finished it off was fantastic."

Wright: "Arsenal have been synonymous with that kind of goal through the years. It was the type of goal I know Arsene Wenger was all about. It was beautiful to watch and I was so pleased it was Arsenal that scored that." 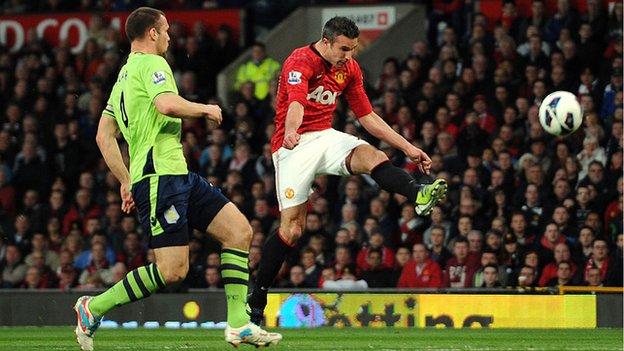 Manchester United wrapped up a 20th league title in style as Robin van Persie scored a first-half hat-trick against Aston Villa, The pick of the three was an unstoppable left-footed volley as the Dutchman ran onto Wayne Rooney's pinpoint cross.

Shearer: "The pass from Rooney inside his own half and then the ball came over his shoulder. He was having to watch it all the way but he has also timed his run to stay onside to perfection. He has caught that volley coming over his shoulder and pinged it past the goalkeeper without bouncing."

Wright: "For him to catch it like he did, it is exceptional technique." 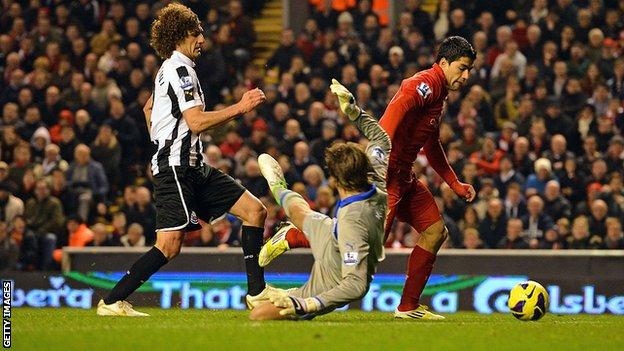 Liverpool were held by Newcastle, but Luis Suarez's equaliser was a touch of class as he brilliantly controlled a long ball from Jose Enrique on his shoulder before rounding keeper Tim Krul and scoring with his third touch.

Wright: "This ball has come from 60 yards and he has controlled it on his shoulder, and in the space of two yards, he has taken it around the keeper and scored. That for me was technically superb. We are talking about a player that went on to improve Barcelona." 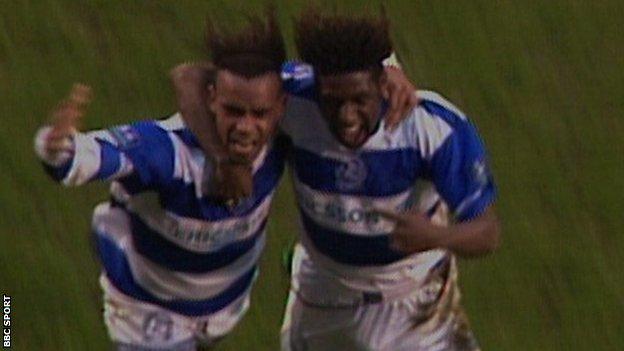 There seemed little danger as David Bardsley's cross floated towards the edge of the Barnsley box in their 1997 fourth-round FA Cup tie away to QPR, but Trevor Sinclair's 20-yard bicycle kick - audacious, acrobatic and accurate - left the Tykes' defence in a state of disbelief.

Shearer: "He was outside the box. It was the best ever overhead kick I have seen."

Wright: "He was on the edge of the area, in around the D, and he caught it so clean. I think it is the best overhead kick I have ever seen." 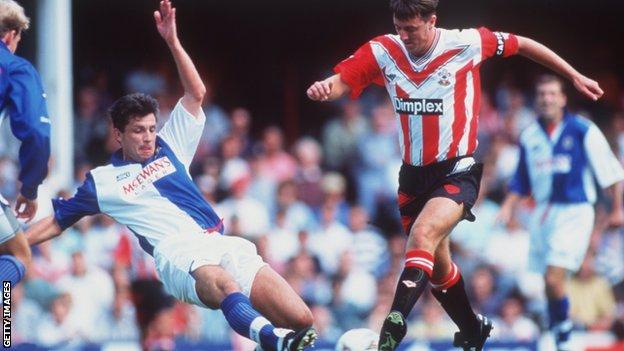 Although Southampton lost at Ewood Park, Matt Le Tissier was at his scintillating best as he jinked one way, and then the other, before drilling the ball into the top corner from long range for his second goal of the game.

Shearer: "Whenever he scored goals like this in games, I was never surprised because I saw him do it day in, day out in training while we were together at Southampton."

Wright: "He picked the ball up in and around the centre circle. He went around two defenders so elegantly and he put it in the top corner. It was just effortless." 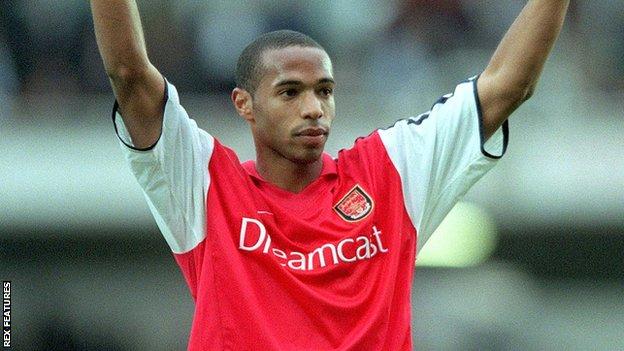 With half an hour gone at Highbury, the French striker flicked the ball up on the edge of the area, swivelled and unleashed a fierce volley over Manchester United keeper Fabien Barthez.

Shearer: "You have got a split-second to decide what you are going to do with the ball. You might already have a picture in your head of players to the left and the right but he flicked it up to perfection and then to get the accuracy on the swivel, it was stunning."

Wright: "The beauty of this goal was that Gary Neville was so tight and he had to improvise like he did. It is why he is so great and why people pay their money to see him. He flicked it up and volleyed it in the corner. Magnificent." 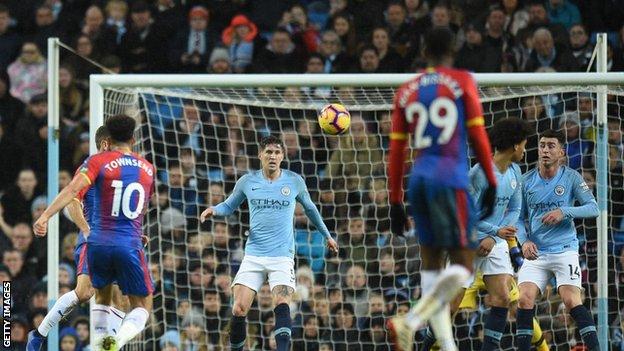 Andros Townsend smashed home a sublime 30-yard volley to help Crystal Palace cause a shock by claiming their first win at Manchester City for exactly 28 years.

Shearer: "You try these things in training and every now and then you catch one sweet. That volley from Andros was as sweet as you're going to see. It was just the middle of the foot. Perfect."

Wright: "The trajectory at which the ball came, for him to hit it so clean, it was perfect. It was the sweetest strike I think you will ever see. He cleansed the ball." 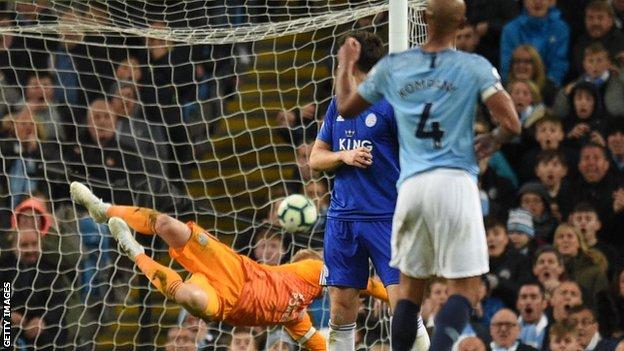 With 20 minutes remaining, the score goalless and nerves jangling at Etihad Stadium, Manchester City's inspiration came from their long-serving captain Vincent Kompany, who strode forward and let fly from 25 yards to hand the defending champions the advantage going into the final weekend of the title race with Liverpool.

Shearer: "This was about the timing of it and how they needed that piece of magic from their captain. He delivered it with a stinging shot in the top corner." 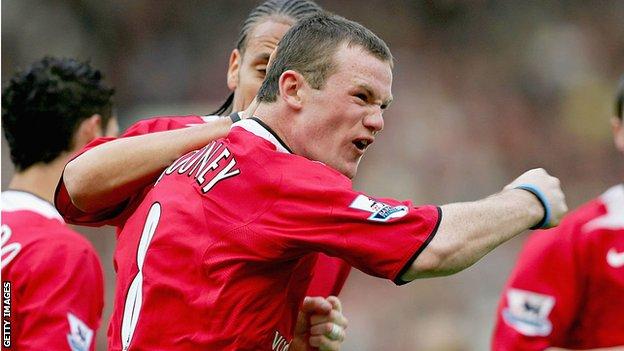 With Manchester United behind in the game, Wayne Rooney had endured a frustrating afternoon, until he met Peter Ramage's clearing header with a fierce volley with the outside of his right foot to beat Shay Given from 25 yards.

Shearer: "I was playing in that game. I was about 10 or 15 yards behind Wayne. I remember him shouting at the referee as he wasn't having a great game and that ball just fell to him. It was a decent clearing header but if there was one person you didn't want it to fall to, it was Rooney. It was an incredible goal."