Jadon Sancho picks up the ball on the right side of the pitch and sets off on a driving, weaving run, gliding between two men before breezing past another. He still has a lot to do when he reaches the edge of the box but he makes it look so easy with a low, precise side-foot finish.

The game is only a friendly before the 2019-20 season, and opponents Seattle Sounders are nowhere near Borussia Dortmund's league, but it is still a goal that makes you sit up and take notice. Brilliant, bold and, well, very Lionel Messi.

Sancho has earned rave reviews since making the decision to leave Manchester in search of regular first-team football in Germany in August 2017.

But it is the similarities in his game to the Argentine forward - the low centre of gravity, ability to carry the ball effectively and unerringly accurate finishing - that is getting Dortmund and England fans most excited.

Having left his teens on 25 March, Sancho now faces a decade that will define his career.

On the day of Borussia Dortmund's huge top-of-the-table Bundesliga clash with reigning champions Bayern Munich on Tuesday, BBC Sport looks at the stats and asks; could Sancho be the long-term heir to Messi's crown?

From relative obscurity in Manchester City's academy to Bundesliga stardom and a prominent place in the full England squad - Sancho's rise since joining Dortmund has been meteoric.

The 27 Bundesliga goals the right-sided forward scored before his 20th birthday make him the highest-scoring teenager in the division's history - three ahead of current German international striker Kai Havertz, who turned 20 himself a little under a year ago.

Though he took his goalscoring to a whole new level in the years that followed, before reaching 20 years of age on 24 June 2007, Messi had 21 La Liga goals to his name.

To use another relevant point of comparison, Portuguese forward Cristiano Ronaldo - the only man who can hold a torch to Messi's goalscoring numbers this century - had scored 11 times in the league before he left his teens on 5 February 2005.

When you combine Sancho's tally of goals and assists as a teenager, not only is he ahead of the competition in Germany, he is miles in front of any other young attacking player in Europe.

As you can see above, there is a huge gulf between Sancho's goal involvements since 2018-19 and the next best teenager in any of Europe's top five leagues.

Such impressive stats stack up well against players of any age across the continent's top five leagues since August 2018, leaving him fourth behind the impressive trio of Robert Lewandowski, Kylian Mbappe and that man Messi.

He shoots, he scores

What truly puts Sancho at the front of the pack chasing Messi's long and impressively woven coat-tails is his ruthlessness in front of goal.

As a wide forward, he may not get the same amount of chances as a more central striker but, when the opportunities do come, he is as good as any at putting them in the back of the net.

His conversion rate of 30.2% is second only to Dortmund club-mate Paco Alcacer across Europe's top five leagues since the start of the 2018-19 season.

So clinical is his finishing, Sancho far exceeds the tally he is expected to score according to Opta's expected goals metric, which measures a chance on the likelihood of it being scored using hundreds of thousands of historical examples.

He is second only to Messi in this regard, with the pair the only two in Europe's top five leagues to exceed their expected goals tally by double figures since the start of 2018-19.

Another similarity between Sancho and Messi is their supreme ability to carry the ball and produce something at the end of it, a talent the Englishman demonstrated on Saturday with a run and pass to set up Achraf Hakimi's game-settling goal in a 2-0 win at Wolfsburg.

Sancho has contributed to 21 league goals for his side (either in the form of a finish or assist) following an attacking carrying run since 2018-19.

For clarity, Opta define attacking carries differently to dribbles, with the latter meaning a run that involves going past a defender. An attacking carry involves progressing the ball at least five metres, but not necessarily after taking on a defending player.

His tally since the start of 2018-19 puts him joint top in Europe's top five leagues on 21, with Messi and another young player touted as the Argentine's heir - Paris St-Germain and France forward Kylian Mbappe. 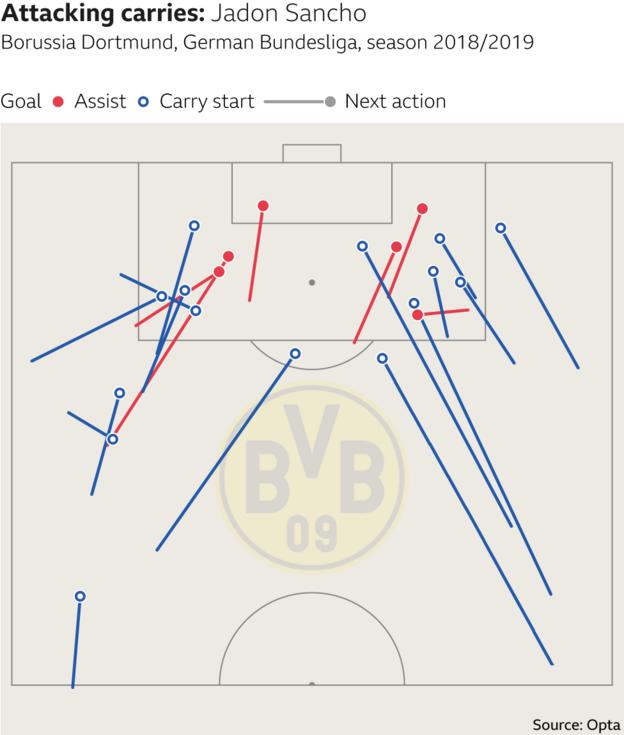 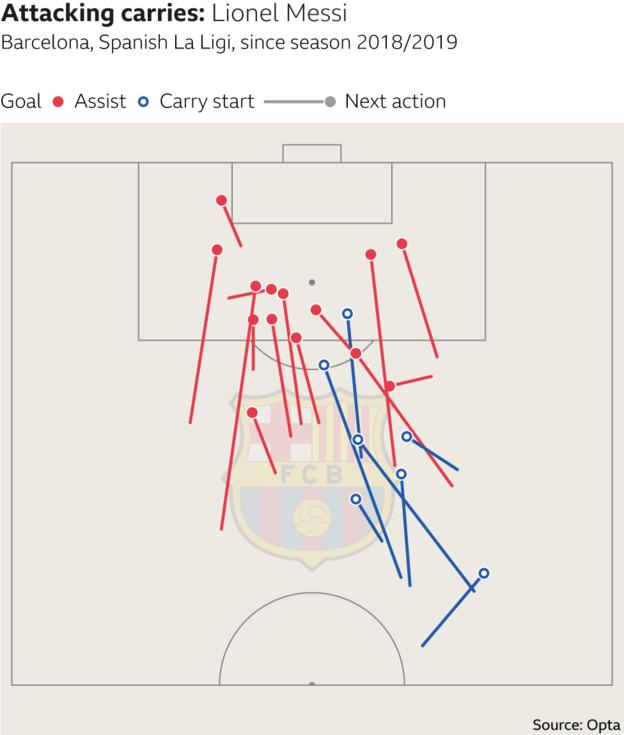 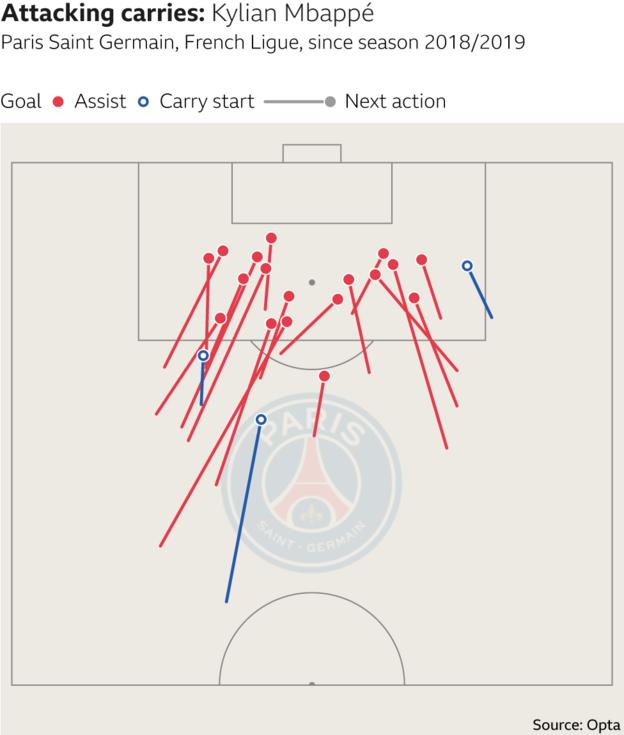 With Messi (and his great rival Ronaldo) now into their 30s, inevitably people are looking to the next generation of attacking superstars.

Sancho has the skill-set and has demonstrated the promise to go on and possibly emulate the pair but he still has an awfully long way to go before we can even begin to consider him in their league.

Messi currently has 438 league goals to his name as part of an overall club tally of 627 for Barcelona, just the 596 ahead of his young challenger.

Sancho has only just begun to scale the mountain. The real work starts now.