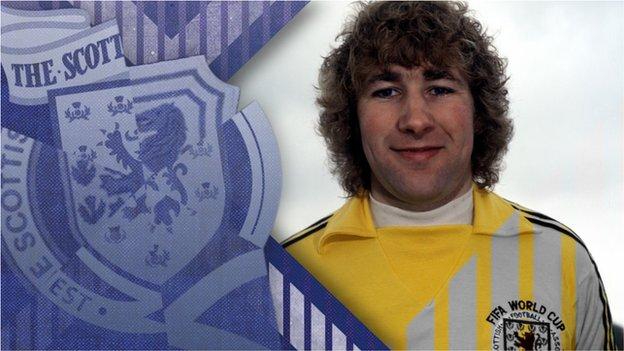 A hotel from hell, furious fans, a failed drugs test and perhaps the greatest victory in Scottish football mark out Argentina 1978 as the biggest debacle in Scotland's World Cup history - and there have been a few.

In qualifying the Scots defeated European champions Czechoslovakia, boasted players from England's big hitters and had beaten Chile while also holding Argentina the previous year. That gave manager Ally MacLeod confidence to expect Scotland to come home with "at least a medal". What could go wrong?

The then Partick Thistle and Scotland goalkeeper Alan Rough was one such hopeful traveller, but in this - Alan - Rough guide to Argentina '78, he explains how things went wrong quickly and how a heroic win wasn't enough to salvage the campaign.

When we left Scotland the scenes were unbelievable, I've never seen anything like it and I don't think I'll see anything like it again. I was playing for Partick Thistle in front of 3,000 people every week, going to a World Cup was something out of this world for me.

We left Hampden where thousands of fans cheered us off and travelled to Prestwick airport. Supporters were lined up all the way on the road on the flyovers with flags. When we got to the airport there were thousands there too. I didn't even get a chance to say cheerio to my wife.

We were on a good run as well, in my first 16 games for Scotland we won 14 of them. I don't remember any of the players talking about medals or what we were going to do, but we definitely knew we had a good team.

The place we stayed in was absolutely ridiculous, it was just diabolical.

It was the Sierras Hotel in Alta Gracia, around 30km from Cordoba. We were two to a room, it was just a room with a bathroom, there were no windows or anything. The food wasn't organised, it was just whatever got put in front of you. The training ground we went to was an absolute shambles as well.

You were practically confined to your room watching foreign television. To be fair, we did have a full-sized swimming pool with a dome covering it, it was just a shame there was no water in it.

Boredom had set in. But that is no excuse for how badly we played in the first two games...

They were a better side than I thought they'd be. Nowadays, you'd have analysts watching opponents in five or six games. You'd have a full dossier on them and all the technical stuff that goes with it. There was none of that.

For me the turning point was Don Masson's missed penalty at 1-1. If we'd scored that we'd have got something out of the game.

For Peru's third goal - the free-kick - I'm not blaming the wall but i think it was Stuart Kennedy and Lou Macari, he hit the ball straight at their faces and they ducked out of the road as players do. I got a hand to it but it was never going to be enough. Maybe it was the wrong people at the wrong end of the wall.

The fans turned pretty quickly. They'd travelled so far, the amount of money they'd spent, the expectations, the anger.

Morale dipped dramatically after the Peru game and when you are hearing all the publicity we were getting at home, then going back to that hotel it made things worse. We were locked in there, there was security at the gate, you couldn't get out, couldn't go for a wander.

We were allowed one phone call a week. I'd be talking to my wife and she'd be saying, "What are you getting up to? You are out drinking every night" and so on. It was so far from the truth.

The biggest story written about us over there was that three of us had been held up against a fence at gunpoint with two security guards going to shoot us because we'd broken a curfew. I think it was myself, Derek Johnstone and wee Joe Harper. The security boys didn't know who we were. It wasn't as bad as was said, they were just doing their job. That's the kind of stuff that was filtering back, it was incredible.

Then there was what happened to Willie Johnston. After the Peru game, he and Kenny Dalglish were taken for a drugs test. Willie had been prescribed this treatment by an English doctor for a nasal issue and, unbeknown to him, it contained a substance that was on the banned list.

He was huckled out of the hotel during the night, nobody knew til the morning. He just disappeared, he was taken away to the airport.

That game was the worst ever. With everything that was going on behind the scenes, you couldn't focus on the game.

Because of the disappointment, what was happening to wee Willie, a siege mentality set in.

A longshot and a shot from distance

I've watched that game back and we could have easily been three up in the first half.

They took the lead with a Rob Rensenbrink penalty. It was never a penalty in a million years. Mind you, the penalty for the goal that put us 2-1 up was a bit soft as well...

Once wee Archie scores his second goal and it's 3-1, you can see Graeme Souness making a sign asking how many goals we needed.

The second Dutch goal will live in my brain forever. I got a really good hand to put it over the bar but turned around to see it go in.

Their second came too soon after Archie scored his famous goal. You were happy to win the game, but we were out on goal difference. The dressing room wasn't celebrating, it was just a relief that we'd shown people we could play.

There was an awful lot of regret. The disappointment was the worst in all of my career.

We had three days before we flew home. We moved to Buenos Aires, but when we checked into the hotel, Martin Buchan said, "I'm not staying here, this is an absolute doss house". So Martin told the driver to take us to the Hilton where the Scottish FA was staying.

We'd heard all these stories that people at home weren't happy and they would be in Glasgow waiting on us. We stopped in London first to let the boys who stayed there get off. I'm sitting there with Derek Johnstone and I'm thinking there's only four of us left on this flight, people were getting off in London who didn't even live there.

I always remember me, Ally MacLeod, Derek Johnstone, Joe Harper and Danny McGrain flying into Glasgow. When we got there, there were fans on the tarmac spitting blood. I don't know what Ally thought, I think he thought they were a welcoming committee. The bold Ally gets off the plane first and starts waving to people.

I don't think it went down too well.