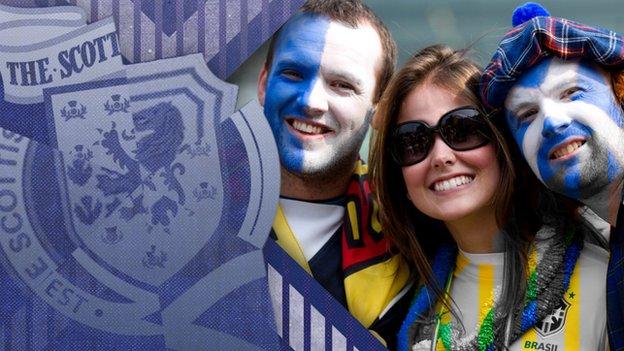 Breaking a hip and wheeled around by the Scotland manager. Chartering a jet to the Faroes. And accidentally scrawling graffiti on a 700-year-old religious artefact.

These are just a flavour of the tales told by Tartan Army members about their tours with Scotland.

After thousands of Scots descended on London for Friday's showdown at Wembley, here are some of their publishable stories from other times on the march...

I've only missed three games since 1993, including away games and friendlies. If it's Japan, I'm offski. If it's America, I'm offski. The only place I haven't been to in Europe is Azerbaijan. I've started watching the women's team as well. You just do it for the love of the jersey. The football is often disappointing, but the fans never let the side down.

My first trip was against England after the Second World War in 1947. The first time abroad was the World Cup in Germany in 1974. I gave up my job to go to Spain in 1982. I was a primary school teacher at the time, but I was told if I went to the World Cup there might not be a job for me to come back to, so I told them "I'll tell you what you can do with your job...".

My most memorable moment was when I suffered a triple hip fracture on my way to Stockholm. I missed the game and it took me a year and a half to recover. I went to all the games during that time in my wheelchair, though. Even Craig Brown took a turn wheeling me.

Discharging yourself from a Belgian hospital

Me, my dad and brother had gone to a double-header against Wales and Belgium. Three days before we left, my dad had his gall bladder removed. He wasn't in the best of shape, but he said he was going.

The night before the Belgium game, the three of us had gone to a party, but my dad had left early as he wasn't in the best of ways. We got back to the hotel in the wee hours, then the next morning we phoned our dad's room and got no answer. So we banged the door, but got no response and started to worry. He had the tickets, so we thought we weren't going to get to go to the game.

All of a sudden he turns up. "I've been in hospital all night, they had to put me on an IV," he said. "They weren't going to let me out so I discharged myself."

He still had the drip sticking out of his wrist so I removed it and bandaged him up, and off we went to the game. We got beaten in that one as well.

We got back and dad went straight to work - he didn't go home, never told his wife, and we were told to stay hush. That was fine until two weeks later a hospital bill for 600 euro came through the door...

I used to be involved with a lot of Tartan Army charity work and we support children in every country we go to. This trip was to Moldova, and we took a bus load with gifts to an orphanage. We took little bottles of Irn-Bru and the funniest thing was watching the kids get their first taste of it. You saw the look of utter confusion on one little girl's face, then suddenly it lit up when she tasted it and she downed the bottle in one. That's the memory that's stuck with me the longest.

Also, when we went to the Faroe Islands, we hired our own plane. We had about 26 of us on this small executive jet with its own bar. It was phenomenal. We rocked up at Glasgow Airport at 3am and had our own check-in desk and security. It was one of the best experiences of my life.

A cracking bird & an international incident

In Hong Kong, one of the lads came down to the bar next to the hotel. He told his room-mate he had found a "cracking bird" and had left her in the room. The room-mate rushed upstairs worried about his stuff being nicked, only to discover his pal had purchased a chicken at one of the local markets and let it loose in the hotel room.

There was also a Tartan Army guy who signed a guest book at a monastery in deepest Moldova. He took a new page and signed "TA woz ere 2004". The book turned out to be an ancient religious artefact. It was more than 700 years old and had a prayer written in it by St Francis of Assisi, so they said. Very nearly a huge diplomatic incident...

We were over in Warsaw and went out to enjoy all that the place had to offer. When the pub closed, me and my pals went looking for a nightclub. After finding what we thought was just the very place, the doorman said something to me in Polish and I just nodded at him, not understanding a word of it.

Turns out we gate-crashed somebody's 21st. I befriended a few locals and ended up at a house party somewhere. When I left, I realised I didn't know the way to my hotel, so I found a park to sleep in. Waking up rough in the morning, I managed to make my way back to the hotel.

It was my 40th and Scotland were playing in Wales, then Belgium, so we decided to organise a few buses from Cumbernauld and Oransay.

After the match in Wales, someone asked one of the drivers if he fancied coming for a few pints. The next morning, as both cohorts were getting on to the buses, the driver heading back to Oransay realised he'd lost the keys to the bus. Everybody heading back to Scotland had to wait for another driver to get to Wales with spare keys, whilst the rest of us headed onwards to Belgium.

Partying with the Rosenborg team

While we were at the 1998 World Cup, we were looking for tickets for the Brazil game while in Bordeaux. I got chatting to a Norwegian from Trondheim. I asked him if he was a Rosenburg fan, to which he replied, "yes".

I asked him if he went to games often and he replied, "I'm actually the Rosenburg manager". So instead of getting tickets to the Brazil game, we got tickets for the game against Norway. I met Joe Jordan who signed the team sheet for me. We also got to meet the full Rosenborg team and the president.