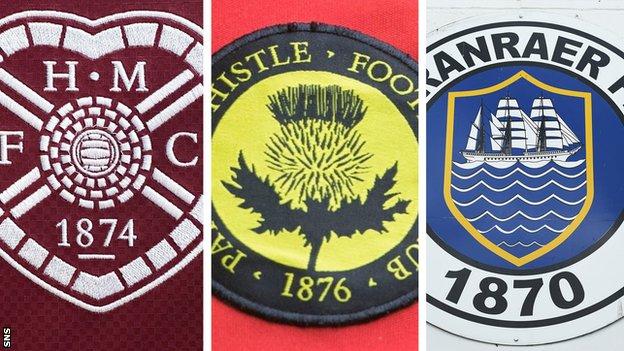 Hearts, Partick Thistle and Stranraer will find out on Monday if they might still avoid relegation as clubs submit views on league reconstruction.

If there is insufficient backing, the current 12-10-10-10 structure will remain in place.

That would consign Hearts to the Championship, Partick Thistle to the League One and Stranraer to League Two.

The trio were all relegated having been bottom of their respective divisions when the campaign was curtailed amid the coronavirus pandemic.

The SPFL board will meeting on Monday morning to discuss the responses and are expected to make a statement later in the day.

SPFL chief executive Neil Doncaster said the results of the indicative vote will "steer the board on whether to put forward a formal resolution".

At that stage, clubs would formally vote at an EGM and the resolution would need the backing of 11 of the 12 Premiership clubs, 17 combined from the top two tiers, and 32 from all four divisions.

However, even if the outcome falls just short of that threshold, the board may feel there is sufficient support to merit a formal vote.

On Saturday, Partick Thistle urged clubs to do "the right thing" and back the proposals, which would also involve Lowland League champions Kelty Hearts and Highland League counterparts Brora Rangers join the SPFL.

However, they face an uphill battle with some clubs unconvinced about a permanent change.

Aberdeen chairman Dave Cormack, for example, has maintained he would support a temporary change for two years to avoid inflicting relegation on clubs, but would not commit to a lasting alteration.

Hearts' own plan for three leagues of 14 teams did not attract support, and the club have not ruled out legal action in the event reconstruction falls through.

Former Tynecastle chairman Leslie Deans claimed the SPFL could use 'executive powers' to force through restructuring if a majority of clubs indicate they support it.

In an open letter to all 42 sides, Deans asked "if more than 21 of our 42 clubs give a positive response, will the board use the executive powers it possesses to impose reconstruction?".