There is still much to be decided with regards to qualification for the two European club competitions as we head into the Premier League's final round of fixtures.

Manchester City's successful appeal against their European ban means the top four in the Premier League will (probably) qualify for next season's Champions League, with the next two (or possibly three) going into the Europa League.

So who plays who on Sunday's final day, which clubs are likely to qualify and who could meet in what would effectively be a Champions League play-off? With one or two games to go, BBC Sport talks you through the permutations. 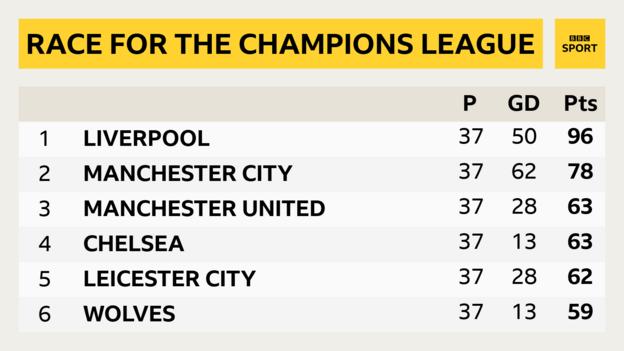 Premier League champions Liverpool and Manchester City, who will definitely finish second, have already booked their place in next season's Champions League.

Chelsea, Leicester and Manchester United are battling it out for the final two group-stage spots.

There is a possibility only the top three would qualify for the Champions League - if the two major European club trophies are both won by English teams who finish outside this season's top four.

Why? Because there can be a maximum of five English teams in the Champions League.

That is all extremely unlikely though, given that Chelsea were thrashed 3-0 at home by Bayern Munich in the first leg of their Champions League last-16 tie.

United will guarantee a top-four finish if they at least draw at rivals Leicester in their final league game. If they lose, they will need Chelsea to do likewise.

Chelsea, who are one point clear of fifth-placed Leicester, just need a point against Wolves on the final day to secure a place, as a result of City and United facing each other.

The only way Leicester can guarantee a spot in the top four is by beating Manchester United. However, a draw would be enough if Chelsea lose to Wolves - as a result of their superior goal difference.

Leicester manager Brendan Rodgers said after his side's 3-0 loss to Tottenham: "It was always going to go down to the last game and we have a shot to get into the Champions League.

"The players will have a couple of days rest then focus on the next game. It will be a fantastic game and we can look forward to it." 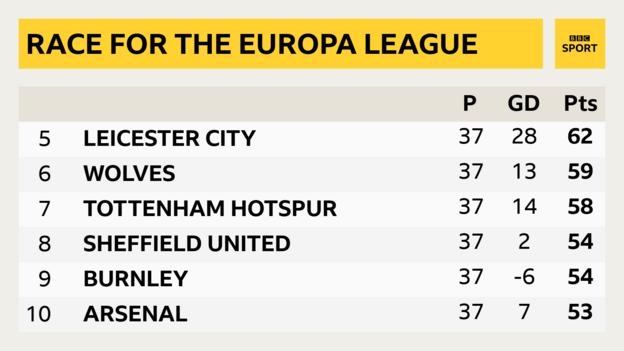 The teams who finish fifth and sixth will qualify for next season's Europa League (unless they win one of next month's European tournaments).

If the FA Cup winners finish in the top six, then seventh place in the Premier League would qualify for the Europa League. The team who qualify in the lowest league spot go into the second qualifying round.

FA Cup finalists Arsenal are 10th in the league and cannot finish above eighth.

At least one of Chelsea, Leicester City and Manchester United will end up in the Europa League spots but we will focus our permutations on the teams who will hope to qualify.

Wolves will qualify for the Europa League if they beat Chelsea on the final day. But if they lose they could still finish seventh.

Spurs are guaranteed at least seventh but need Wolves to drop points if they do not want to worry about who wins the FA Cup. If Wolves lose at Chelsea, a point for Spurs at Crystal Palace would be enough. If they do finish seventh, they will need Chelsea to win the cup.

What happens if an English team wins in Europe?

Manchester City, Chelsea, Wolves and Manchester United all play in Europe next month. If any of them win their trophy, they will go into next season's Champions League group stage no matter where they finish in the league.

If Manchester City (who lead Real Madrid 2-1 in the last 16) win the Champions League, it makes no difference to the European places in the Premier League - England would not get any extra places.

But if Chelsea (who trail Bayern Munich 3-0) win the tournament and finish outside the top four, then five English teams would go into next year's Champions League with two in the Europa League.

The same is true for Manchester United (leading LASK 5-0) and Wolves (1-1 v Olympiakos) in the Europe League last 16.

Uefa regulations suggest England could have eight teams in Europe if that happened and one of them did not finish in the top six/seven - or nine if they both fail to.