After a goal drought stretching to 12-and-a-half hours, Alfredo Morelos ended it with a five-minute double.

Having had his head turned by transfer speculation, the Rangers striker had his focus back against St Mirren in Sunday's 3-0 win.

And whether he stays or goes, amid persistent links with Lille, Morelos' return to form was warmly welcomed by manager Steven Gerrard and Rangers fans.

'He was at a crossroads'

Morelos' slump was stark - he had gone nine games without a goal, and netted once in 14. In the Scottish Premiership, he hadn't scored since Boxing Day, triggering a 10-game barren run.

Alarming figures for a forward with 77 goals in 139 games for Rangers, the club's top scorer in each of his three seasons at Ibrox.

Yet on Sunday, the distracted, lethargic Morelos who had lost his golden touch in 2020 was nowhere to be seen.

Instead, the 24-year-old looked hungry and full of desire, scoring twice from close range in the second half to crown his man-of-the-match display after delivering an assist for the first-half opener. St Mirren had four shots in total, Morelos had double that tally, including five on target.

A warning from manager Steven Gerrard over the Colombia international's lacklustre recent performances - plus the arrival of Kemar Roofe and Cedric Itten to provide real competition up front - had the desired effect. 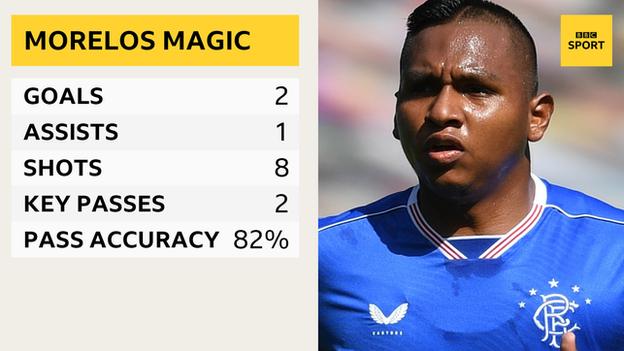 "The Morelos of old was back on Sunday," says former Rangers striker Billy Dodds. "Unselfish, sprightly, sharp, team player. It was an all-round different guy and a much better performance.

"He had to realise he was at a crossroads. He is not going to get a move, or stay in the Rangers team, playing the way he has been.

"It's a wake-up call. I think Gerrard has had a word with him and said, 'Look, you either nosedive and it could affect you getting a move, or you screw the head, because we need you to start performing.'

"The two new signings are chomping at the bit to come in. Morelos didn't have that competition last year. If he doesn't perform he'll be out of the team. What a response it was from him."

What next - keep or sell?

Speculation linking Lille with a move for Morelos continues to linger, with Rangers reportedly having turned down an improved £16.25m bid from the French side.

The Ibrox club are said to be holding out for £20m for their most saleable asset. And Dodds believes they are now in a much stronger position to be able to let him go without weakening their hopes of denying Celtic a 10th successive title.

"Rangers might still sell him - I would probably have cashed in on him last season - but performances like Sunday's will make everybody happy," Dodds added.

"If he keeps playing like that, Morelos will either get his move or Rangers will get the best from him in such an important season and keep his transfer value high.

"He is a top player Rangers could do with if they're to stop 10 in a row. They've now got options, though. Whereas they had to keep him last year because they had nobody else, now if they let him go they have two top-class strikers to call upon."