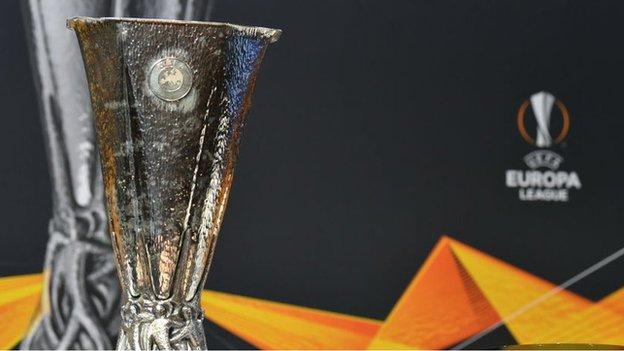 The trio and two players showing symptoms are in self-isolation.

Nomads say the tie will be played after consulting Public Health Wales, Uefa and the Football Association of Wales.

"Ideally the game would have been cancelled and we'd pick it up again maybe in a couple of weeks, but that's not allowed," said boss Andy Morrison.

"It's not ideal. But once I got over the (feeling of) poor me, the natural character kicks in and you feel your back's against the wall, your stomach starts going and you think bring it on, we'll deal with whatever you throw at us.

"It's not about going into it with a game plan now. It's about trying to stay in the game as long as we can and finding a way to affect them when we get possession of the ball."

The five absentees leave Connah's Quay - who were already without George Horan and Callum Morris - with only 13 players for the one-legged second qualifying round tie, which will be played at Wrexham's Racecourse Ground because the Nomads' ground is not deemed Covid-compliant.

"We are down to the bare bones - a goalkeeper and 19-year-old kid (on the substitutes' bench)," Morrison said on Connah's Quay's social media.

A statement issued by the Cymru Premier side said their playing squad and staff were tested on Tuesday night.

"Throughout our return to play, we have adhered to all of the regulations and recommendations put in place by both the FAW and Uefa," it said.

"The health and safety of our staff and players is our absolute priority at all times and every single decision and action that we have taken reflects this.

"As a result of the positive tests, all affected players have been put into self-isolation with immediate effect.

"Following communications with Public Health Wales, Uefa and the Football Association of Wales today [Wednesday], we have followed all of the steps in the Return to Play protocol and every recommendation made to the club throughout each phase of our return to competitive football.

"By diligently following the advice of the relevant authorities and putting extensive measures in place, we've been given the go-ahead to continue with hosting the game at the Racecourse."