Alicia Powe is a full-time nurse and part-time central defender.

For the Swansea City Ladies captain, football provides "stress relief" from her day job, on a ward at Swansea's Morriston Hospital.

However, the return of the Welsh Women's Premier League after a six-month break this weekend brings with it sporting pressure.

History will be made when Swansea, the champions, play Cardiff City on Sunday, as the game will be the first in Welsh top-flight history to be shown live on television.

"It's a huge step in women's football," says 30-year-old Powe. "There are a lot of nerves in camp at the moment, but we are ready."

Powe has been at Swansea since 2004. She has represented Wales, won titles and made numerous Champions League appearances, but she has never played on live TV.

"That's the same for most of us," she says. "Everyone is going on about it.

"I know the girls are really excited just to start the league - it's been such a long period without football and we have all missed it so much.

"But starting off the season against Cardiff City, going into the game as champions - there could in some aspects be more pressure on us."

Swansea's last competitive game was in March, when the league was suspended because of coronavirus.

The Swans, who did not lose a game throughout 2019-20, were crowned champions when the season was abandoned in May. 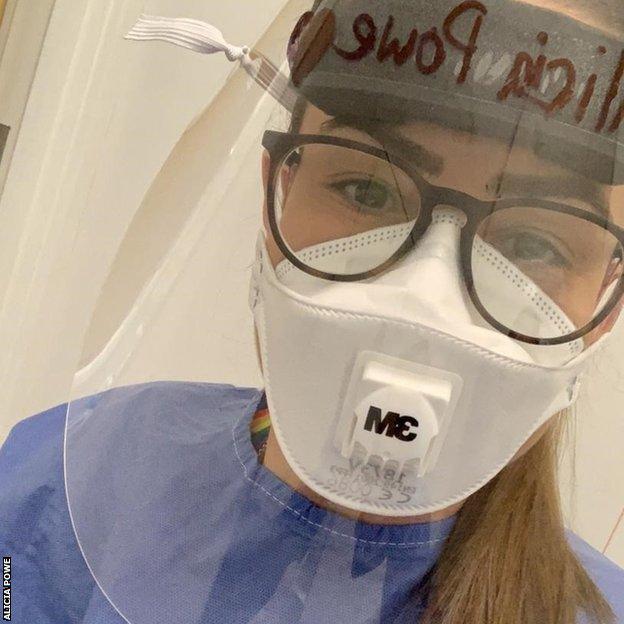 While the United Kingdom was in lockdown, Powe was still going to work in Morriston Hospital's ear, nose and throat and maxillofacial ward.

"I don't work in an intensive care environment, I work on a ward," she says.

"But obviously we have had an influx of Covid coming through over the last few months so I have been in the mix a bit. We've all mucked in together.

"It's been great (to see) the support that everyone has given the NHS."

Powe says the early days of the pandemic were particularly hard.

"My job is stressful anyway, but with Covid, in the beginning especially nobody really knew what was going on," she says. "It was a lot of added pressure.

"With not being able to go to football, I was just going to work, coming home, sleeping and going back to work. Then all the days off were just spent in the house.

"It was a difficult time but everyone has mucked in and got through it. Hopefully everything will start to settle down and we can start to go back to normal."

Swansea returned to training in August, albeit with various Covid protocols affecting what they did.

"There was a lot of social distancing to begin with so it wasn't particularly football training if that makes sense, but as time has gone on, it's getting back to normal-ish.

"It has been really good to get back with the girls."

Most Swansea players have to make football fit around jobs.

"I know myself with work, they are really understanding," Powe adds. "They will try to rota me to have training days and game days off."

Last season's title triumph means there are Champions League ties around the corner, although exactly who Swansea will face - and where and when games will happen - is uncertain because of coronavirus.

Powe says her bosses are "going out of their way" to ensure she is not required on the ward whenever the Champions League comes around.

"I know a lot of girls are in the same situation," she says.

"There is a lot of support around us - the Swans are going to the Champions League so they are good to us."

The immediate focus is domestic matters, and the meeting with a Cardiff side who finished third last season.

The TV cameras may mean extra tension, but Powe says Swansea will "relish the opportunity".

"We have strengthened with a lot of new players so we feel confident we can go and give it all we have got," she says.

"Hopefully it will go our way."