It took place in Lens but on that day it could easily have been London or Cardiff.

The French town's streets were packed with thousands and thousands of England and Wales fans, all desperate to witness a battle between two old rivals that had become all too rare in recent decades.

"I have never experienced anything like it," BBC Radio 5 Live commentator John Murray said at the time. "It feels like I've been thrust back into the UK.

"There are British supporters mingling on the streets, this ground and the weather have a British feel to it."

The day in question was 16 June 2016 as England faced Wales at the European Championships.

Before Thursday's meeting between the two sides, we look back at how the day unfolded through the eyes of people who were there at the time.

For 100 years England and Wales were annual opponents in the British Home Championship, which ran until 1984.

But in the three decades since they had met just four times, making this encounter in Lens a significant moment.

"When Wales play England at anything, any sport, it's the biggest game," former Wales striker Dean Saunders said on BBC Radio 5 Live. "It's a bigger game for us than England really."

Such was the magnitude of the encounter that the Welsh town of Bala temporarily renamed itself Bale - in honour of the team's star player Gareth Bale - prior to the fixture.

This was Wales' first time at a European Championships. Their team was made up of a number of players who had largely played in the lower leagues of English football. Striker Hal Robson-Kanu didn't even have a club.

Former Wales midfielder Robbie Savage said on BBC Radio 5 Live: "No pressure on us today, it's a free hit. All the pressure is on England.

"I've just seen the Welsh lads walk out. Simon Church, Jazz Richards, players who have played in lower leagues. Then you look at John Stones (on the England bench), worth millions and millions."

Wales, though, did have Bale. 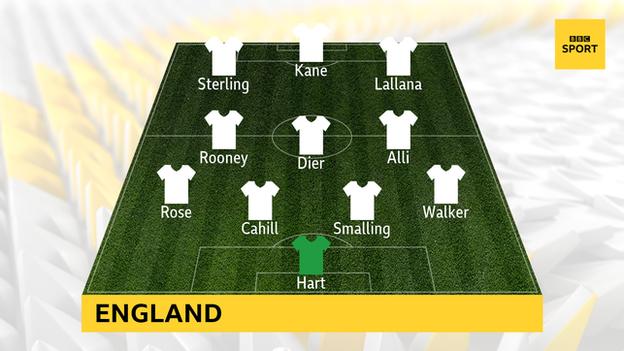 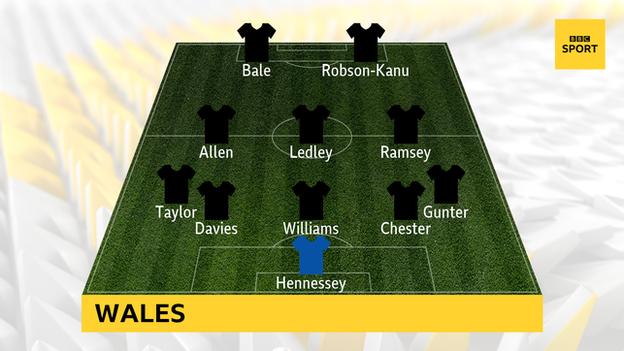 Wales had won their Group B opener 2-1 against Slovakia, while England had drawn with Russia, but it was the Three Lions who started this game the stronger.

Raheem Sterling, questions marks looming over his end product in the build-up to the tournament, almost went through inside the first minute before the Manchester City forward then put a great chance over the bar.

"This is the area Sterling needs to improve," former Arsenal and England defender Martin Keown said on BBC One. "He needs to bury that one. Great chance for England."

With half-time approaching, England were dominating possession - all that was missing was the goal.

But then, Wales had a free-kick. Up stepped Bale, who arced the ball over the wall and although Joe Hart got his hands to it, he couldn't keep it out - 1-0 to Wales.

"I have to say, when he's lined up to hit it I'm thinking you can't score," former England winger Chris Waddle said on BBC Radio 5 Live. "England's number one has got to save that."

England boss Roy Hodgson responded by taking off Kane and Sterling at half-time and sending on Daniel Sturridge and Jamie Vardy in their place.

It was a bold tactical switch but one that paid off as Vardy pounced on a loose ball to equalise in the 55th minute before his fellow substitute Sturridge popped up with the winner deep in injury time, stabbing home from close range.

"I don't think Wales as a team today played that well," said Savage after the final whistle.

"Wales were hanging on in the second half and you have to say, Roy's subs have won England the game. Fair play, but Wales will live to fight another day."

Shearer added: "Roy did what he had to do, he gambled and brought the subs on. When you bring subs on they have to make an impact and the two guys have done that. They deserved it."

It was a memorable encounter and one that perhaps led to a decrease in productivity in offices across England and Wales.

A record 2.3 million people tuned into the BBC online - and 6.6m on TV - to watch the afternoon kick off, smashing the previous online highest of 820,000 for the London 2012 Olympic tennis finals.

Wales were understandably disappointed after coming so close to getting a result, but ultimately they would have the last laugh.

They breezed to a 3-0 win against Russia to go through as Group B winners and would go on to reach the semi-finals, memorably beating Belgium before losing to eventual winners Portugal.

For England, the win against Wales would be their solitary highlight of the tournament.

A goalless draw against Slovakia in their final group game saw them finish second and into the last 16. There their journey ended with a humiliating 2-1 defeat to 34th-ranked outsiders Iceland.

A tournament to remember for Wales. One to forget for England.