Scotland boss Steve Clarke was dealt a heavy blow as six players dropped out of his squad for the European Championship play-off semi-final.

All being well, Ryan Christie, Scott McKenna and Kieran Tierney would have been nailed on starters at Hampden, with Liam Palmer and Stuart Armstrong not far behind in Clarke's thoughts.

As ever, we asked you to pick a starting XI, so how have armchair managers reacted to the dramatic loss of such key personnel?

Captain Andy Robertson is in just about every team, with almost 70% putting the Liverpool star in at left-back rather than a wing-back position, while goalkeeper David Marshall has an 83% backing.

John McGinn is also a huge favourite, leading the way in every midfield slot, but he can't do it all alone, with Callum McGregor and Scott McTominay the next most popular options in the middle of the park.

In attack, most of you want Ryan Fraser back now that the winger is getting up to speed at Newcastle and Lyndon Dykes wins the race for the number nine jersey hands down after a promising start to his international career.

Interestingly, Oli McBurnie is the eleventh most popular pick overall, but can you see Clarke going with two up top from the start? With 4-3-3 the favoured formation (is that just because you can't be bothered changing the template?), it's hard to find a natural place for the Sheffield United striker.

With McKenna and Tierney missing, Leeds skipper Liam Cooper emerges as top choice at both left and right centre-back. Declan Gallagher is a long way back in second place in both positions, while only around 10% want to see McTominay deployed in defence again.

So we have two strikers and only one centre-half in the first eleven picks, while 4-3-3 leads the way with only one winger. It's a head-spinning proposition which illustrates the conundrum facing Clarke.

Here it is then, with apologies to McBurnie, who has to make way for a defender and I think we all know McGregor isn't going to pop up out wide... 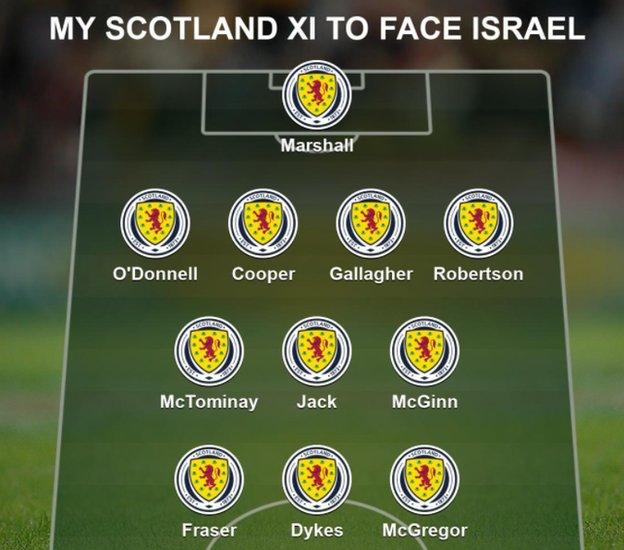