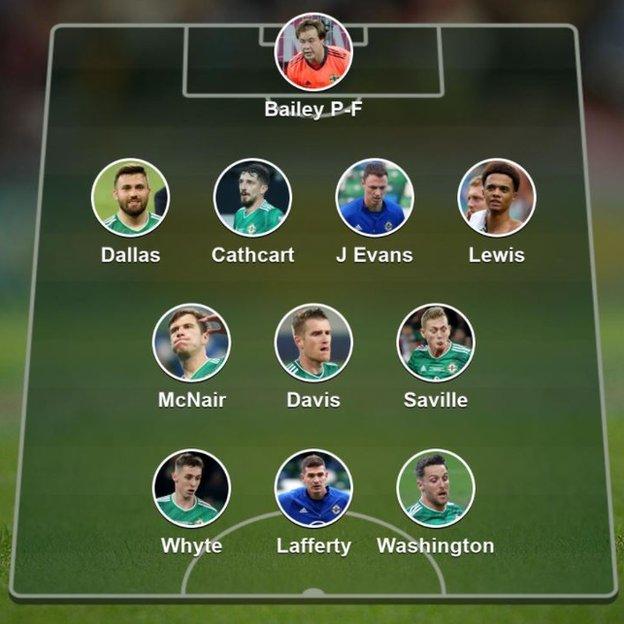 We asked you to step into Ian Baraclough's shoes and your answered! Here is the starting line-up for Northern Ireland's Euro 2020 play-off against Bosnia-Herzegovina if BBC Sport readers were in charge.

You think the tried and trusted 4-3-3 formation is the one for Baraclough to go with, with 67% of users opting for three forwards for the game in Sarajevo.

Between the sticks, 75% of readers gave Burnley goalkeeper Bailey Peacock-Farrell the nod ahead of Michael McGovern and Trevor Carson.

Leicester City defender Jonny Evans was the most-selected player overall, picked by a whopping 97% of voters. Is he the man to stop Edin Dzeko from inflicting more pain on Northern Ireland?

Craig Cathcart will partner Evans at the heart of defence while the full-back positions were dominated by in-form Leeds United man Stuart Dallas and Newcastle United left-back Jamal Lewis.

Steven Davis, who is set to become Northern Ireland's most-capped player, comfortably topped the selection in midfield with 90% of the vote.

The majority of you decided that Paddy McNair and George Saville are the men to partner the skipper in the middle of the park.

The forward line threw up the most-interesting combinations, with Kyle Lafferty selected by 25% of readers to lead the line, flanked by Conor Washington and Gavin Whyte.

Reggina forward Lafferty is searching for his first international goal since November 2016 and narrowly pipped Josh Magennis for a starting spot by just one percent.

Washington got the nod out wide, again ahead of Magennis, while Whyte edged out Jordan Jones for the final starting berth.

Do you agree with the BBC Sport readers' selection? Have your say and don't forget to share your results!

Who will Baraclough select? You can listen to the game live on Radio Ulster and online, with match highlights on BBC One NI at 23:20 BST.