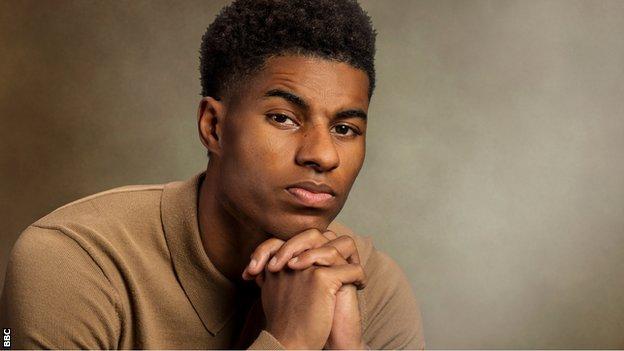 "There were times when there wasn't any food, so you'd just go to sleep. The people that were closest to me knew about the situation me and my family were going through, but my team-mates and coaches didn't."

At the start of 2020, Marcus Rashford was a Manchester United and England footballer. He will end it as an internationally recognised social justice campaigner on child food poverty. His work for the provision of free school meals in England during holidays and other support to low-income families prompted major changes in government policy.

That work has been recognised with a string of awards - he was made an MBE in the Queen's Birthday Honours list, was recognised at both the Best Fifa Football Awards and BBC Sports Personality of The Year, and was included in the annual Football Black List.

In a new documentary - Marcus Rashford: Feeding Britain's Children, which will air on BBC One on Monday - the 23-year-old lets us into his family life, and into his campaign to tackle child food poverty.

'Sometimes we didn't even have a loaf of bread' - Rashford's background

The film gives a unique insight into Rashford's childhood.

His mother Mel - a single parent of five - explains how she worked three jobs when Rashford was growing up.

While working as a bookmakers' cashier, she took on another job in the shop. "I used to finish my shift and then go back and do the cleaning," she says, adding: "I used to do pot-washing on a Saturday as well."

Mel says there were times she served up food for her children but there would not be enough for herself.

"Sometimes we didn't even have a loaf of bread in the house," she says. "But I wouldn't tell somebody I was struggling - it was embarrassing."

In one scene in the documentary, Rashford visits Wythenshawe - the area of south Manchester where he grew up. He reflects on how local businesses supported him and his family.

"If they knew my mum was in work, they'd just let me have a portion of chips or something," he says.

"It was a big decision that had to be made," Mel explains. "But because I was working nights, there wasn't really anyone to look after him."

Rashford credits his mother with instilling in him the values he is proud of, and she has been heavily involved in his efforts to tackle food poverty during the coronavirus pandemic.

In the film, we learn the footballer moved her and his brothers into a house near Wythenshawe.

Mel says: "Marcus has provided a home for me and I sit there sometimes and just cry to think of where we've come from."

Rashford says: "I think in sport you have to have something behind you that is pushing you.

"When you come from a place of struggle and pain, a lot of the time it switches and it becomes your drive and motivation."

'Have they experienced these things?' - Rashford's campaign begins

Rashford's campaign started after the UK went into lockdown because of the coronavirus pandemic in March.

He began working with FareShare to raise money to give meals to vulnerable people.

In June, he told the BBC that about £20m had been raised to supply three million meals.

Rashford was driven by his own experiences.

"The system was not built for families like mine to succeed, regardless of how hard my mum worked," he wrote.

In the BBC film, he says it was "out of character" for him to open up about something so personal, but he believes it was necessary.

"The people making decisions - have they experienced these things?" he asks.

Soon after Rashford went public with his letter, the government reversed its decision.

Mel says she was "over the moon", adding: "I must have rung him about 20 times!"

The campaign did not stop; the film follows Rashford as he pushes for further support.

In touching scenes, he visits his primary school, Button Lane.

Head teacher Emma Roberts tells him she is so proud of what he is doing, and Rashford talks to pupils and shares his stories of meeting friends for life in breakfast club.

Jackie Jones, the school's safeguarding lead, describes how the number of families seeking support from the breakfast club has risen since the start of the pandemic.

"Breakfast club has gone from about 30 to 70 children," she tells Rashford. "It used to be about families with parents who work - it's become about families who cannot and don't have the facilities or the money to feed."

Rashford also visits a community store in south London that works with charities to redistribute surplus food from supermarkets to local low-income families.

They say the waiting list of families wanting to use their services over the summer has grown and they are worried about what happens when the school voucher scheme ends.

'It is so insensitive' - the campaign continues into winter

In September, Rashford formed a taskforce of major UK food brands and supermarkets.

Together, they called for three policy recommendations by the National Food Strategy to be funded by the government as soon as possible: expanding free school meals to reach more children, expanding existing school holiday food and activities programmes and increasing the value of the Healthy Start vouchers - which help pregnant women, and parents with children under the age of four - to reach an additional 290,000 people.

The government responded by saying it had already increased support to local authorities and Universal Credit.

"It was almost like there was no emotional connection," Rashford says. "They were naming the things that they've been doing for the last six years, but if those things had worked then I wouldn't be doing what I'm doing."

A petition set up by Rashford, calling for the government to offer free school meals in England during school holidays, reached one million signatures in October. A Labour motion on free school meals over holidays in England was debated in the House of Commons but the motion was voted down.

"Have any of the people in government speaking about this had a life where they can literally afford to buy food and pay bills and that's it?" Rashford asks.

"I doubt that they have. The way they speak about it is so insensitive. For me, it's like they don't have big enough understanding on the issue."

In the aftermath of the vote, countless businesses, councils, charities and other organisations from around the country came out to show support and offered free meals to struggling families over the school holidays.

"To see so many people do it off their own backs, all over the country - for me it was just a really proud moment," he says.

After huge public pressure, the government decided to offer extra support to hard-pressed families over the winter.

In an incredible moment in the film, Rashford receives a personal phone call from Prime Minister Boris Johnson, setting out the changes his government would be making.

"I gather you've just played Everton?" says the prime minister, before asking whether he scored. A modest Rashford replies that he got an assist and his mum had just been teasing him for missing a header.

Johnson goes on to set out his government's plans to support vulnerable families in England over the winter. They include a £170m Covid winter grant scheme to feed the most vulnerable, £220m to provide extra food and activities for children in school holidays, an extra £16m to food distribution charities and an increase in value of Healthy Start vouchers.

From the package of support, a £170m ring-fenced fund will be distributed through councils, with at least 80% earmarked for help with food and bills.

Rashford takes it in his stride. And it doesn't sound as if he's stopping there.

"I'm happy we've got to this stage," he says. "But I can't stop thinking about what the bigger picture looks like."

If any of the issues in this article have affected you and you would like to get help, there are a number of organisations and initiatives that you can approach