He drew his first game in charge of Motherwell, but new manager Graham Alexander could earn two 3-0 victories on Thursday without even picking a team.

At a stroke, the Fir Park club's relegation woes would be eased. However, they could also be heightened with similar speed at the whim of a Scottish FA disciplinary panel.

Motherwell will not be involved in the process but would be the biggest beneficiaries should Kilmarnock and St Mirren have their appeals against an independent SPFL tribunal sanction dismissed.

The latter two Scottish Premiership clubs believe punishing their failure to fulfil fixtures amid Covid-19 outbreaks by awarding opponents Motherwell two 3-0 wins - and Hamilton Academical one - is too severe, despite conceding they broke the rules.

A SFA judicial panel appellate tribunal will hear the case on Thursday, but how did we reach this stage and how is it all likely to unfold?

Remind me, what is this all about?

The postponement of matches in October. Had the games gone ahead, none of this would have happened.

St Mirren failed to fulfil fixtures against Motherwell and Hamilton after a Covid-19 outbreak, while Kilmarnock were unable to play Well for the same reason.

That triggered an independent SPFL investigation, during which both clubs admitted infringing the league's social distancing rules on buses and at meals, while St Mirren players also shared cars to and from training.

Both clubs were given suspended £40,000 fines, but, more pertinently, 3-0 victories were awarded to their opponents in those games and the table updated accordingly.

However, little over three weeks later, those points suddenly disappeared from the standings, with the SPFL soon confirming that those sanctions had been "suspended pending appeals".

What are the clubs saying?

Kilmarnock have kept their counsel in recent weeks, but, when the sanctions were announced, they described themselves as "so aggrieved".

It is understood they believe their breaches to be less serious than those of St Mirren, given their transgressions were unwitting.

The club argue that they followed Scottish government guidelines around social distancing - rather than the SPFL's rules - while eating in hospitality venues pre-match.

At the time, the Ayrshire outfit criticised the "sanctions-based approach, which has proved costly, time consuming and caused considerable stress". They also called on the football authorities to update their social distancing guidance.

When the verdict was announced, St Mirren insisted they "operated honestly throughout" and manager Jim Goodwin reiterated that after Saturday's draw with Motherwell.

"There are things that have happened that are not the club's fault - individuals have done things they shouldn't have done, like car sharing," he told BBC Scotland.

"Celtic had an issue with [Boli] Bolingoli, the Aberdeen boys with the pub, the Rangers players going to a party... these were all dealt with individually. It's only right that everybody gets treated the same.

"You can see how tight the league is, so award teams round about us points without games being played is extremely unfair."

Comparisons have been made with England, where scores of matches have been called off in similar circumstances. But those have yet to be rearranged and disciplinary action could still be forthcoming.

Meanwhile, clubs unable to fulfil Nations League fixtures in the autumn had to forfeit matches 3-0 and Glasgow Warriors were given a 28-0 defeat after they could not field a team for their European Champions Cup game with Lyon in December.

What will happen on Thursday?

Nothing until 18:00 GMT. That is when a SFA judicial panel appellate tribunal will begin to consider the case.

Like in most of the association's disciplinary cases, a three-strong body has been drawn from an existing list, with legal expertise foremost among their qualifications.

Although Kilmarnock and St Mirren appealed against their sanctions separately, the hearing will be heard together, with the clubs sharing the same QC. Despite that, it is feasible that their cases could reach different outcomes, given the divergence in the offences.

And, while a verdict could be announced late on Thursday, it seems more likely that the panel will take time to reach its decision, with most parties braced for a conclusion early next week.

Should the clubs be successful, the SPFL will rearrange the three outstanding matches. Should they fail, the table will be adjusted to award Motherwell an extra six points and Hamilton three.

That would have the effect of moving Motherwell level with Kilmarnock - seven clear of bottom spot - and Hamilton would nudge up to ninth. So there is plenty at stake. 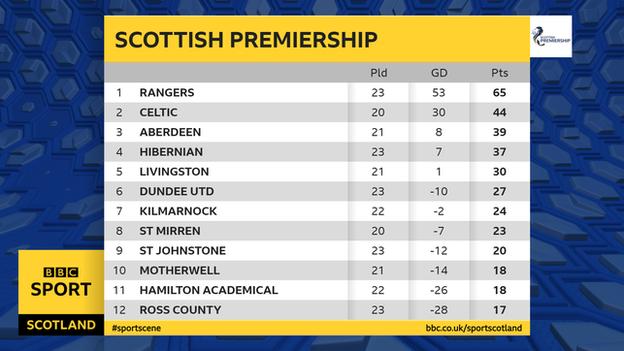