After 14 years and more than 600 appearances, Scott Brown's trophy-laden Celtic career has reached a crossroads.

The club captain is out of contract at the dethroned champions this summer and will be 36 by the time the next campaign kicks off.

Will he still be at the club next season, in either a playing coaching capacity? Or will he make a clean break for a fresh start elsewhere? BBC Scotland assesses the state of play.

Brown's standing as a Celtic great is indelible. Only Lisbon Lions Billy McNeill and Bobby Lennox can top his haul of 22 Celtic trophies and the midfielder is one of just seven players in the club's history to have passed the 600-game mark.

He has been the figurehead of Celtic's domestic dominance and quadrable treble run - and this was supposed to be the season he reinforced his legendary status by leading the club to their fabled 10th successive title.

That plan has of course gone spectacularly awry - Rangers walked the league as Celtic fell from grace - and currently the only certainty at Celtic Park is that no one knows what comes next.

Brown's situation is intrinsically linked to the state of flux at Celtic. There is no manager, with John Kennedy in interim charge after Neil Lennon's departure last month, and chief executive Peter Lawwell will make way for Scottish Rugby counterpart Dominic McKay in July.

Major decision-making looks on hold for now, but Brown said in the wake of Lennon's exit that, following talks with Lawwell, it is "completely up to myself whether I want to stay or go into a coaching role" and insisted he still has plenty to offer on the pitch.

With a host of players predicted to leave this summer, and a major rebuild in the offing, the midfielder's vast experience could be key in providing stability and experience even if his game time is limited.

Former Scotland midfielder Michael Stewart is of the belief that Celtic are better served with Brown still around in some capacity.

"Celtic need to be keeping Brown for another year or two with all the turnover happening at that club," Stewart says. "He has a part to play in that transition.

"He's out of contract so it's his decision. I think he's earned the right to make that decision without any bad feelings. It might be the thing that attracts Brown to stay at Celtic if they offer him a coaching role."

A managerial vacancy 150 miles north of Glasgow has muddied the waters over Brown's future.

With the Aberdeen job now up for grabs it's understood that former Pittodrie midfielder Stephen Glass - a strong contender for the role as Derek McInnes' successor - wants his one-time Hibernian colleague Brown as player-assistant manager.

That would offer the midfielder, who is currently doing his coaching badges, the best of both worlds in allowing him to prolong his playing career in the Premiership while learning the ropes in the dugout.

Having spent his whole career in green and white - five years with Hibs preceded his move to Celtic - the sight of Brown marauding around in Aberdeen red seems a peculiar prospect.

But the chance to escape the Glasgow goldfish bowl could prove tempting to the former Scotland midfielder, and it's a surprise potential move that excites that Aberdeen legend Willie Miller.

"We were lucky enough to have Billy McNeill [as manager] and there was always the feeling he was being given that opportunity before going back to Celtic," says Miller.

"I think that's what it would be with Brown. I think at some time Brown would want to be a manager in his own right.

"Aberdeen should be taking advantage of the uncertainty at Celtic Park. Who else could offer him something like that? My advice for the chairman is go and get them in place."

"What a perfect situation for Scott if he went into that to develop himself," Bonner says. "On the pitch he can be a big influence and off it he can learn his trade."

Interim Celtic manager John Kennedy discussed the Aberdeen link on Friday, saying it has yet to materialise into anything "concrete" but that Brown "won't be short of offers" in the summer.

"He is very much an important player for us and we want it to stay that way," Kennedy added.

How do his performances stack up?

As captain, Brown was a natural focal point for Celtic supporters' frustrations as their title dreams disintegrated.

Critics claimed he was slowing the team down, and he lost his place to the 22-year-old Ismaila Soro in the final few months of Lennon's tenure.

Brown's leadership qualities are not in question, but can he still cut it on the pitch with a top Premiership club or has time finally caught up with him?

Of Celtic's 32 league games this season, Brown has featured in 25, including 19 starts. Compared to last term - where he started all but one of Celtic's 30 Premiership fixtures - Opta data shows he is attempting and completing more passes per 90 minutes, with his success rate up from 57.9% to 61.3%.

It could be argued, though, that is simply a symptom of Celtic's laboured approach in trying to break down deep-lying and well-drilled opposition.

Brown's average number of interceptions has also increased, from 1.4 to two on average. But his recoveries - regaining the ball when neither side has possession, or accepting a pass - and tackles, the foundation of a defensive midfielder's work, are both down.

While far from the only culprit for Celtic's ills this season, as the captain of a sinking ship he has underperformed and cannot avoid a share of the blame.

Now it remains to be seen whether he he will still be around to help try to initiate a revival. 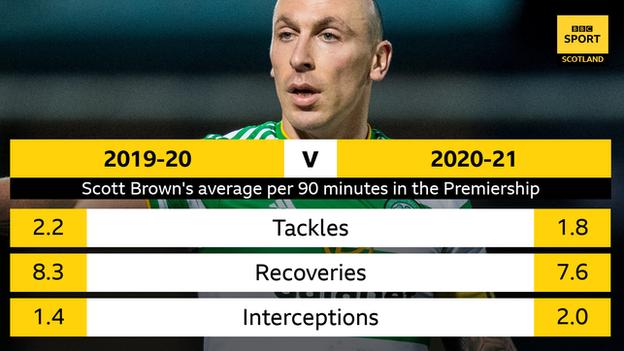