It's been nearly three months of frustration, but Scottish League 1 and 2 are primed for the resumption of action on Saturday.

A revised fixture programme has finally been agreed with the SPFL as the 20 clubs return more unified than ever and determined to complete the campaign.

So how did we get here? How will the season be finished and what should you look out for during the remaining weeks?

How did we get here and what happens now?

Both leagues followed the set-up of the Championship season, with a delayed start in October, 27 rather than the usual 36 rounds of fixtures and no regular testing.

Things were going relatively smoothly until January, when a surge in cases in Scotland led to all levels of football below the second tier being suspended.

The last games played in the bottom two tiers were on 2 January. Some clubs had completed as few as eight matches, no team had played more than 11. Cue real concern over whether the season could be finished, and even if it would restart.

However, as Scotland's Covid-19 situation improved with the roll-out of the vaccine, first minister Nicola Sturgeon lifted the lower-league shutdown on 2 March on the condition players were tested before matches.

So, all good, right? Well, this being Scottish football, there was still plenty of wrangling to come. The 20 clubs now wanted to play a reduced 22-match season, with a split after 18. The SPFL - mindful of the potential chaos if fixtures went unfulfilled - wanted a straight 18 games.

Finally, a compromise of sorts was agreed. The clubs got their wish, but if any club hasn't completed 18 games by 23 April, the play-offs in that division will be scrapped.

It's going to be a tight squeeze, but no team will be asked to play more than four matches in eight days and the start of the play-offs has been pushed back three days to 8 May.

From these trying times, a spirit of comradeship has been fostered among the clubs. They intend to offer rivals the use of facilities or move games to a neutral venue if required and are "proud to have reached this point unified and determined to face what lies ahead together".

What to look out for - League 1 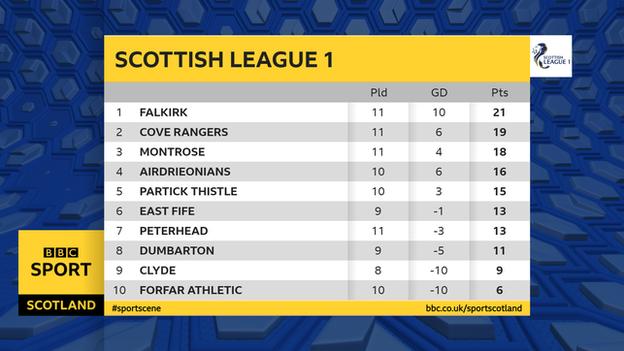 There are a number of teams vying for top spot and the automatic promotion that comes with it.

Falkirk, led by co-managers Lee Miller and David McCracken, are the frontrunners with a two-point lead.

A standout midfield of Blair Alston, Charlie Telfer and Callumn Morrison helped Falkirk hit the top, but the team's form dipped with just one point from three games before the abrupt shutdown.

Leading the chase are Paul Hartley's former Highland League heavyweights Cove Rangers as they bid for a third successive promotion.

After making the play-off places last season, both Montrose and Airdrieonians are firmly in the mix again, three and five points behind Falkirk respectively.

Partick Thistle, controversially demoted when last season was cut short, have toiled at times but are still in the hunt for an instant return to the Championship - six points off the summit with a game in hand on the top three.

At the other end of the table, Forfar Athletic already look in deep trouble. They prop up the standings with just one win and six points from 10 games.

Clyde occupy the relegation play-off spot three points above - but they have played just eight games, fewer than any other team in the division.

Dumbarton, Peterhead and East Fife aren't out of the reckoning either, with just seven points separating the bottom five teams in a congested survival fight.

The pick of the opening fixtures sees Ian McCall's Thistle away to Cove before travelling to Airdrie the following weekend for another clash with a promotion hopeful.

What to look out for - League 2 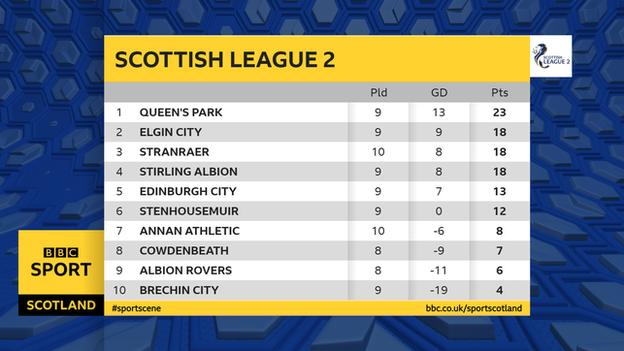 The picture seems much clearer in the bottom tier. Newly full-time Queen's Park's big spending is on course to pay off with the title as Ray McKinnon's men hold a five-point advantage and unbeaten record at the top.

Even the play-off spots are taking shape, with Elgin City, Stranraer and Stirling Albion all locked together on 18 points, five clear of Edinburgh City.

After being saved by the absence of relegation last season, Brechin City are again rock bottom, having taken only four points from 27.

Brechin aren't cut adrift, though, and Albion Rovers, Cowdenbeath and Annan Athletic are all within four points in what is emerging as a four-team battle.

The games to look out for in the first week are leaders Queen's Park welcoming Stranraer and second-place Elgin against last term's runners-up Edinburgh.