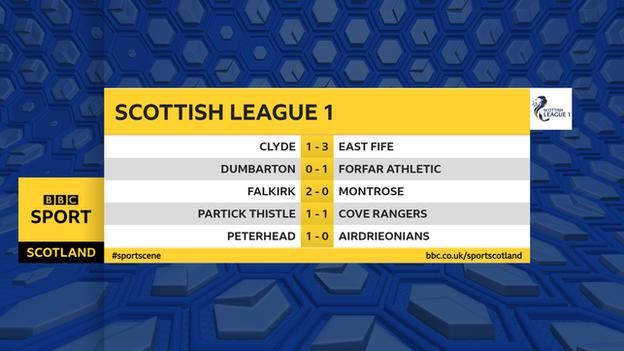 Falkirk moved four points clear at the top of Scottish League 1 with a 2-0 win over Montrose in the first round of matches in more than two months.

Cove Rangers remain second, ahead of Montrose, after a 1-1 draw away to Partick Thistle.

Fourth-top Airdrieonians lost 1-0 away to Peterhead.

Forfar Athletic move off the bottom after a 1-0 win away to Dumbarton as Clyde slumped to a 3-1 defeat at home to East Fife.

In their first game since 2 January, defender Mark Durnan headed Falkirk in front from a corner in the 12th minute and Callumn Morrison wrapped things up with a second in the final minute.

A crazy own goal lifted Forfar off the bottom on goal difference, with Dumbarton goalkeeper Sam Ramsbottom sending a clearance against defender Ryan McGeever and back into the net.

Striker Nathan Austin, back at East Fife on loan from Lowland League club Kelty Hearts, got the ball rolling for East Fife at Broadwood, with midfielder Danny Denholm heading in a second after the break.

Ryan Wallace's header extended the lead, with former Scotland striker David Goodwillie's goal in the final minute being no consolation for Clyde.

Airdrieonians played almost the whole game in Peterhead with 10 men after midfielder Kyle Turner, four minutes into his debut on loan from Dunfermline Athletic, was shown a straight red card for his high challenge on Ryan Conroy.

The home side's extra man was eventually made to count when Jordon Brown broke the deadlock in the 66th minute. 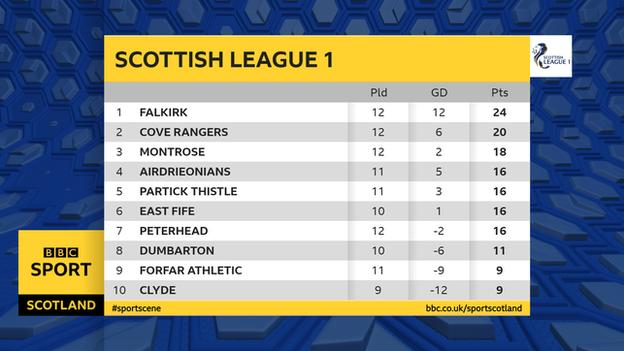