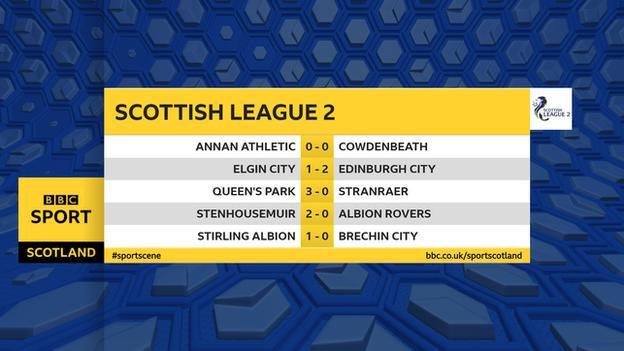 Queen's Park maintained their five-point lead as Scottish League 2 returned for the first time since January.

Ray McKinnon's side beat Stranraer 3-0 at home in the first game since the league was paused due to Covid-19 restrictions.

There were wins for Edinburgh City and Stenhousemuir, while it finished goalless between Annan and Cowdenbeath.

Queen's Park raced into a two-goal lead, with Michael Doyle heading the home side in front in the 20th minute, and Lee Kilday adding a second on the half-hour mark following a free-kick.

Bob McHugh scored a third from the penalty spot in the 65th minute after David Galt had been fouled.

Stranraer midfielder Kieran Millar was sent off late on for a second caution.

Edinburgh City closed up on the top four with a 2-1 win at Elgin, who drop to third.

The visitors went ahead inside three minutes through Josh Campbell, with Robbie McIntyre adding a second in the 12th minute.

Although Josh Peters pulled a goal back shortly before half-time, City held out for all three points.

Stenhousemuir beat Albion Rovers 2-0 with a header from Botti Biabi and Mark McGuigan's strike early in the second half.

In the stalemate between Annan and Cowdenbeath, home midfielder Nathan Flanagan was sent off for a second yellow card in the 70th minute. 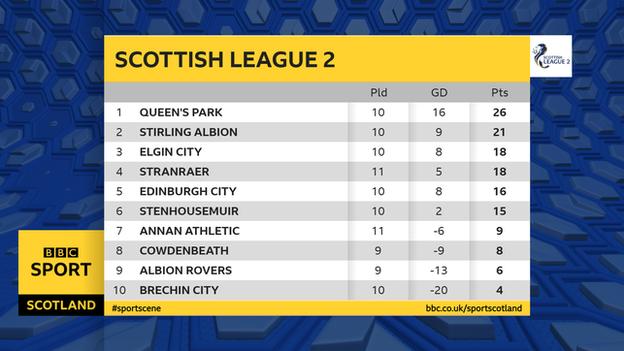