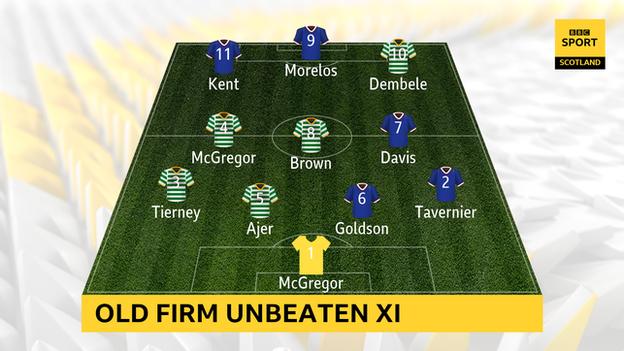 Rangers are now just six matches away from completing the league season unbeaten and matching the achievement of Brendan Rodgers' Celtic in 2016-17.

We asked which players from that Rodgers side and the current Rangers roster would make it into your combined Old Firm unbeaten XI and here are the results.

It's even at the back with two from each side - Rangers captain and vice-captain James Tavernier and Connor Goldson on the right of the defence and Kristoffer Ajer and Kieran Tierney, now at Arsenal, completing the back four.

In midfield, Celtic have stalwarts Scott Brown and Callum McGregor while Steven Davis is in there for Rangers.

And up front, Ryan Kent and Alfredo Morelos of Rangers were selected by most people with former Celtic striker Moussa Dembele also popular, the striker now plying his trade with Lyon.