Scotland remain winless in the start to their World Cup qualifying campaign despite fighting back to clinch a point against Israel in Tel Aviv.

Steve Clarke's side fell behind to a long-range Dor Peretz rocket a minute before half-time after the hosts wasted several big chances.

Ryan Fraser equalised after half-time for the Scots, who also came back to draw with Austria on Thursday.

Scotland could not find a winner, leaving them third in Group F.

Israel, who claimed their first point after losing their opener to Denmark, came close to a decisive goal when Sun Menahem headed into the side netting.

At the other end Scott McTominay shot tamely into a defender, when teed up by a scything, intricate manoeuvre between Andy Robertson, Kieran Tierney and Callum McGregor. Substitute Ryan Christie fluffed a late opportunity.

After more recent encounters between this pair than tugboats have had with the Ever Given, you might have thought they would serve up a turgid affair, that each side would have the measure of the other on their sixth meeting in 24 months.

It was, emphatically, not so. The action cascaded from one end to the other, openings teased then possession surrendered and the whole cycle repeating again.

Scotland's defending, normally an area of robust reliability in Clarke teams, was slapstick at times and passive too often. Players stood back as the Israelis advanced; menacing runners were unchecked and prime real estate unguarded.

It began in the opening minutes when the prolific Eran Zahavi stole into the box and scuffed a clever Eli Dasa cut-back wide, failing to net his 19th goal in 21 matches.

Scotland had not been bystanders in this simmering affair, McTominay heading Robertson's fabulous corner off target.

But after seeing so many warnings and dodging so many blows, Scotland were caught flush on the chin. Peretz had an age to settle and wind up a rasping drive from 30 yards. Marshall met it at full stretch with both hands, but only tipped the soaring ball into the top-left corner of his net. So close to the interval, it was a brutal salvo. 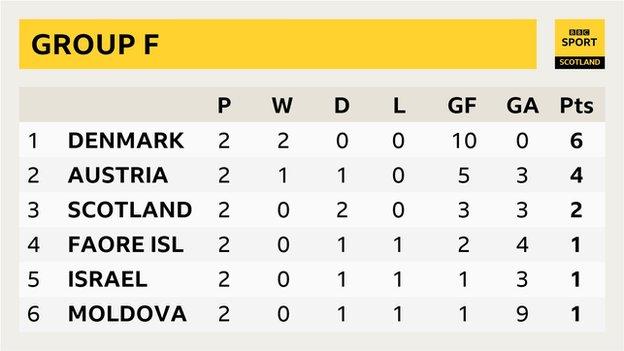 This lot are resilient, though. We've seen it since Clarke took over. We saw it when twice they fought back against Austria on Thursday night.

The Scotland manager swapped the already-booked centre-back Jack Hendry for the attacking incision of Ryan Christie at half-time.

It was his namesake, Fraser, who struck the equaliser. Che Adams, on his first international start, surged up to the edge of the box and squared for the diminutive Newcastle attacker. Fraser chopped back on to his right foot, and planted a neat shot beyond Ofir Marciano.

The two soon combined again, Adams almost turning the game in Scotland's favour when played in by Fraser on a blistering counter, but as he cut in from the left, his curling shot was beaten clear by Marciano.

Israel remained a threat. Stephen O'Donnell allowed Menahem to escape at the back post and skew a deep Dasa curler into the side netting.

McTominay side-footed into an Israeli leg after wonderful interplay between Kieran Tierney, McGregor and Robertson.

There were heart-in-mouth moments for both teams in the last throes. Peretz was rightly booked for diving as Robertson tracked him; Christie spooned an effort tamely short and wide when set up in an enticing position.

In the end, these familiar foes could not be parted. In the context of the game, a point was a decent outcome for Scotland. There is a lot of runway left in this campaign, but Scotland need to start winning to get off the tarmac.

Man of the match - Eli Dasa

What did we learn?

Scotland's mental hardiness was not in question, but they underlined that fighting spirit again having fallen behind in this open tussle, and ceded momentum.

They cleaved Israel open, especially on the break, but barring Fraser's predatory finish, lacked the ruthless touch to make their chances tell.

And defensively, cracks are emerging. Too much space was afforded to Israeli attackers. Several times, slack finishing let Scotland off the hook.

The return of injured Ryan Jack, with all of the ball-winning snarl he brings to bear, should shore things up.

Both sides conclude their opening diet of qualifiers on Wednesday night at 19:45 BST.

Israel travel to bottom side Moldova, while Scotland welcome the Faroe Islands to Hampden Park.

What the stats say