Pep Guardiola says he will "never forget this season" as runaway leaders Manchester City closed in on the Premier League title with victory at third-placed Leicester.

"I love the Premier League more than any other competition. We are close, very close," added Guardiola after his team moved 17 points clear at the top.

"The champions are Liverpool, they have the crown - but we are close to taking it."

Guardiola said City's efforts were "incredible" given most matches this season have been played without spectators because of the coronavirus pandemic.

"In lockdown without spectators - every game we were there," he added. "I will never forget this season."

In their first match since announcing club-record scorer Sergio Aguero is to leave at the end of the season, Guardiola's free-scoring side were frustrated before Benjamin Mendy broke the deadlock.

Fernandinho had a goal disallowed, Kevin de Bruyne's free-kick hit the bar and Riyad Mahrez was denied against his former club by Kasper Schmeichel's save.

However, France defender Mendy produced a lovely curling finish after stepping inside a challenge from Marc Albrighton before Gabriel Jesus sealed the points for the visitors from close range.

Leicester thought they had taken the lead on the stroke of half-time through Jamie Vardy but his celebrations were cut short by an offside flag.

Perfect start to a huge month

This was the perfect start to a huge month for Guardiola and his players as they attempt to close in on a historic quadruple.

Having started April with a controlled, disciplined and impressive win against a team that had taken 16 points off the supposed big six this season, they could end it with the Carabao Cup, and a place in both the FA Cup final and the semi-finals of the Champions League.

It is no longer a question of if they win the Premier League for the third time in four seasons, but when.

Raheem Sterling, Ilkay Gundogan, Phil Foden and Bernardo Silva started on the bench at the King Power Stadium yet the visitors never looked back once Mendy took advantage of a weak challenge by Albrighton to curl his side ahead. 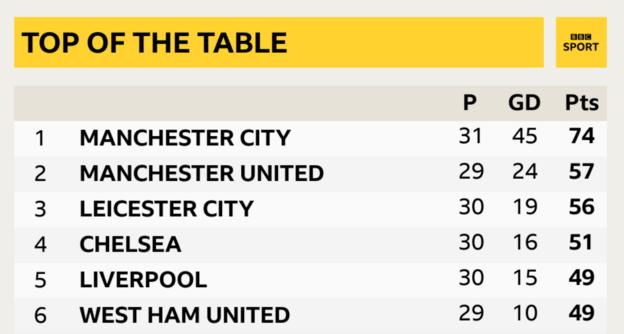 The second goal was a joy to watch.

Following De Bruyne's defence-splitting pass, Sterling and Jesus played a one-two before the latter poked the ball over the line for his side's 105th goal in 47 matches in all competitions this season.

Guardiola's side have kept more clean sheets (28) and conceded fewer goals (26) in all competitions than any other side in Europe's top five leagues in 2020-21.

They now turn their attention back to the Champions League, a competition they have yet to win, and the visit of Borussia Dortmund to the Etihad on Tuesday.

On this evidence, it has hard to see City losing again this season.

Leicester were unable to recycle the counterattacking masterplan that earned Brendan Rodgers' side a thrilling 5-2 win at the Etihad last September.

They managed just two attempts on target against the best team in the country but ultimately came up short in their first match after the international break.

Chelsea's surprise home defeat by struggling West Brom earlier on Saturday means Leicester's hopes of playing in the Champions League for the second time in six seasons remain very much in their own hands.

They have responded well to setbacks in the past.

After going out of the Europa League in February, the Foxes took seven points from four games and beat Manchester United to reach the FA Cup semi-finals for the first time since 1982.

Leicester continue to flourish under Rodgers but will want to learn the lessons from this defeat and quickly move on, with West Brom, Crystal Palace and Newcastle among the clubs still to visit the King Power before the end of the season.

'We got disorganised' - what they said

Leicester boss Brendan Rodgers: "For the first hour, we were solid and defensively strong but not as efficient with the ball. We're disappointed with the goals, we got disorganised.

"We lost to the better team. The players kept going and we had some good chances but we can have no complaints.

"They are a fantastic team, you see the likes of Raheem [Sterling] coming into the game and he's a world-class player.

"There's no shame, we won a great game up at their place, we lost today. We'll look at it and we'll have a good week next week."

Manchester City boss Pep Guardiola: "We had the goal disallowed, we hit the crossbar, it was quite a similar game to Everton.

"We had to be patient, don't concede and don't give them chances. We are not going to win in five or 10 minutes, it was important to have patience."

While Leicester have a full week to prepare for next Sunday's match at fellow top-four hopefuls West Ham (14:05 BST), Manchester City now turn their thoughts to Europe and a Champions League quarter-final first-leg home tie with Borussia Dortmund on Tuesday (20:00).