Fulham boss Scott Parker accused his players of not being "streetwise enough" as their relegation fears intensified after defeat at Aston Villa.

The Cottagers were on course to leapfrog Newcastle into 17th spot when Aleksandar Mitrovic pounced on an error by Tyrone Mings to fire the visitors ahead at Villa Park.

However, substitute Trezeguet scored twice as Villa hit three in the final 12 minutes to leave Fulham three points from a position of safety.

"At certain moments in the game, you have to understand where you are and what you need and we didn't manage that," said Parker.

"Sometimes you need to be horrible, play the game in the right territory. We were walking away with one point and then we were sloppy.

"It's a young team but we were naive and made silly mistakes. After the first goal, we dropped our intensity and it affected us too much and we weren't streetwise enough."

Fulham were good value for their lead before capitulating.

Mings, captaining Villa in Jack Grealish's absence, messed up attempting a back pass to Emiliano Martinez, allowing Mitrovic to sneak in, go round the goalkeeper and score.

However, Mings atoned for his error to provide the cross for Trezeguet to equalise with a first-time shot before the Egypt midfielder scored the second three minutes later from an assist by fellow substitute Keinan Davis.

England forward Ollie Watkins added the third from inside the six-yard area.

On the stroke of half-time, with the game at 0-0, Villa thought they had won a penalty when Watkins went down under Mario Lemina's challenge.

However, referee Andy Madley overruled himself after viewing a replay on the pitchside monitor.

Without inspirational captain Grealish for the seventh straight game, Villa looked in a rut when they went behind just after the hour mark.

Dean Smith was hoping to welcome back Grealish from a shin injury but a setback in training on the eve of the game dashed the Villa manager's plans.

Villa have struggled without the England midfielder, winning just one of their previous six matches, and they looked on course for another disappointing result until Trezeguet was sent on shortly after Mitrovic put Fulham ahead.

He scored twice in the space of three minutes to turn the game on its head before playing a part in the third goal by laying it off to Bertrand Traore, who crossed for Watkins to score.

With a trip to Liverpool and a home game against Manchester City coming up, this was a welcome return to winning ways.

Having moved onto 44 points after 29 games - 18 more than they had at the same stage last season - Villa are just five points off a European spot.

They will hope to have Grealish back in time for next weekend's visit to Anfield but they at least proved against Fulham that they can win without their prized asset.

With Newcastle again failing to win earlier on Sunday, this game represented Fulham's best chance yet of climbing out of the bottom three, where they have been anchored since 20 December 2020.

It appeared to be going to plan for the visitors when Mitrovic scored.

Elevated to the starting line-up after scoring five goals in three World Cup qualifiers for Serbia, the former Newcastle player justified his inclusion with his goal.

But Fulham, not for the first time this season, failed to see the game out, Villa scoring three times in the space of nine minutes to take the match away from them.

Only Southampton (18) and Brighton (17) have dropped more points from winning positions in the Premier League this season than Parker's side.

Three points from a position of safety with seven matches left, including a home game against Manchester United, as well as trips to Arsenal and Chelsea, Fulham are in big trouble.

Their last match of the season, at home to Newcastle on 23 May, already looks as if it could be highly significant, but Parker has to make sure Fulham are still in with a chance of staying up by then. 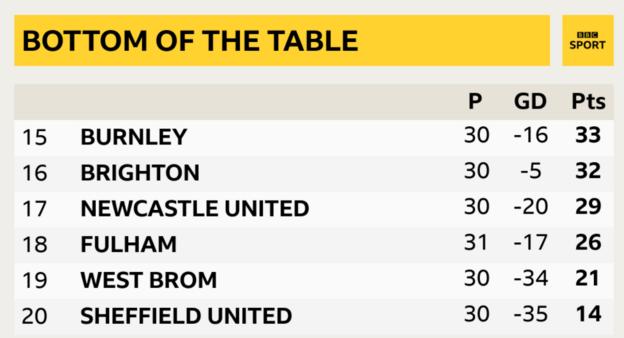 'The subs changed it for us' - what they said

Aston Villa boss Dean Smith: "It's a big win - a win full of character in the end. We believe we've got a quality squad.

"It was certainly a very good last 20 minutes or so. Sometimes you need players to make an impact from the bench and the three who came on certainly did that and lifted our performance.

"The subs changed the game for us. Trezeguet came on and did what I asked of him - made an impact. He has been a little unfortunate at times this season and I am really pleased for him."

Fulham boss Scott Parker: "I thought we were pretty solid for much of the game but the last 15 minutes I didn't like at all and it is something we will need to address.

"We need to be brutally honest, the last 15 minutes is not one we can brush under the carpet. If we do that again, we will not win football matches.

"The games are coming thick and fast with only seven remaining now."

While Aston Villa will hope to have Grealish back for next Saturday's league game at Liverpool (15:00 BST), Fulham are back in action on Friday when Wolves visit Craven Cottage (20:00).