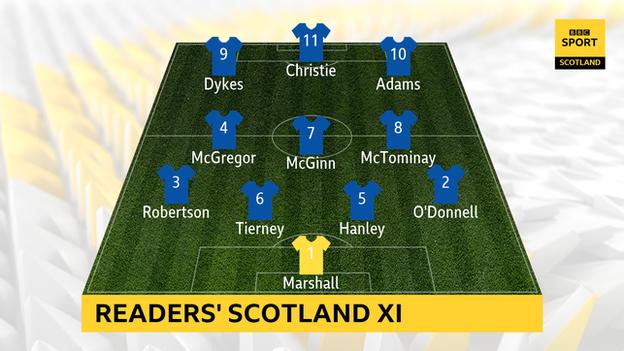 Scotland face their second World Cup qualifier on Sunday against Israel and we asked you which 11 players you would like to see start.

As tends to be the way with football these days, 4-3-3 was the favoured formation, although manager Steve Clarke opted for a 5-3-2 in Thursday's draw with Austria.

Fans are still happy with David Marshall in goal and Stephen O'Donnell, Grant Hanley, Kieran Tierney and Andy Robertson in defence. However, BBC Sport readers want to see Tierney play left centre-back as opposed to left of a three at the back.

Scott McTominay and John McGinn are shoe-ins for the midfield following their performances against the Austrians but Callum McGregor was the next most selected central midfielder.

And, up front, supporters want to see Che Adams given a first start alongside regulars Lyndon Dykes and Ryan Christie.