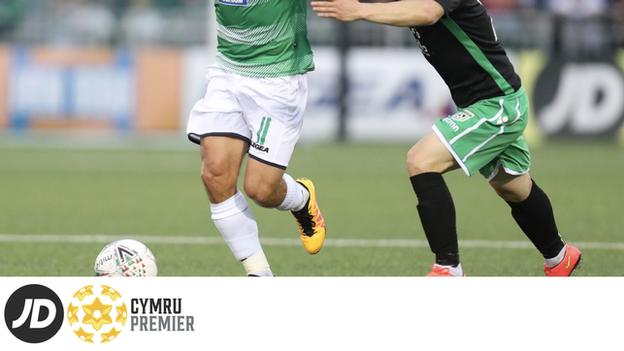 Aberystwyth Town 3-1 Cefn Druids: Druids remain bottom of the table heading into the second half of the season after losing at Aberystwyth, who will join them in the lower tier Playoff Conference. The hosts were 3-0 up within 25 minutes as John Owen, Mathew Jones' penalty and Louis Bradford gave them a commanding lead. Aberystwyth had to weather a late storm after goalkeeper Connor Roberts was sent off and Alex Darlington pulled a goal back for Druids.

Bala Town 5-0 Flint Town United: Third-placed Bala finished phas one in style by hammering second-bottom Flint. Both sides came into the game on the back of heavy defeats, but only Bala responded - with Chris Venables, twice, Lassana Mendes, Antony Kay and Steven Leslie finding the net.

Cardiff Met 1-2 Barry Town United: Barry had already secured their place in the top six but kept up their good form thanks to a late winner from Evan Press. Met, who finish phase one in 11th, fell behind when Rhydian Morgan put through his own net, but had equalised moments later through Emlyn Lewis.

Newtown 1-5 Connah's Quay Nomads: Champions Nomads retained their three-point lead over Saints at the top of the table as the first half of the season reached its conclusion. Newtown, who will now play in the Playoff Conference, led after three minutes through Jamie Breese, but Nomads were stung into action and replied through Craig Curran, Neil Danns, Mike Wilde, a Callum Morris penalty and Jamie Insall.

Penybont 2-0 Haverfordwest County: Haverfordwest's hopes of qualifying for the the Championship Conference were ended at Penybont as the hosts secured their place in the top six. Haverfordwest were seventh and three points behind Penybont and sixth-placed Caernarfon going into a game they needed to win. But goals from Sam Snaith and Mael Davies gave Penybont victory.

The New Saints 4-1 Caernarfon Town: Caernarfon qualified for the Championship Conference alongside Saints despite a thumping at the hands of their hosts. Haverfordwest's defeat at Penybont means Caernarfon finish in the top six. Blaine Hudson and Ryan Brobbel each scored a brace of goals for the hosts, with Paulo Mendes grabbing a Caernarfon consolation in time added on after Michael Parker had earlier been sent off.