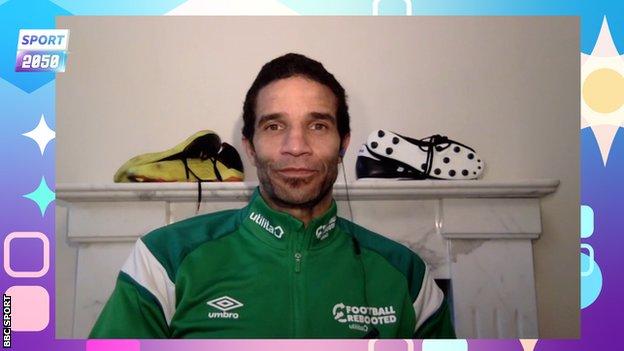 If you ever saw former England goalkeeper David James at the side of the road looking frustrated, it will have been because his environmentally friendly car had broken down.

James is an environmentalist, and after the World Cup in Germany in 2006 he was contacted by a charity that converted diesel engines to run on rapeseed oil.

He said: "The car broke down numerous times, once with my family. It was teething problems, but I was prepared to do it because I thought if I talk about the environment then don't do it myself, I'm essentially a hypocrite.

"I was stuck on the M27 with my kids waiting for a pick-up, and 2,000 cars drove past. None of them would have been rapeseed oil and I thought, 'why am I doing this?' But I thought, 'If I don't do this then no-one else will.'"

James, who made 572 Premier League appearances, is now involved in a scheme to save one million pairs of football boots from landfill.

The initiative encourages people to donate or claim pre-worn boots with the intention of saving families money, and positively impacting the environment. It is estimated the scheme could have the same effect as taking 7,000 cars off the road for a year.

James, who guesses he went through 1,000 pairs of boots over a 20-year career, knows the impact this could have on the environment and the grassroots game.

He said: "As we're coming out of lockdown, the impact of the pandemic on grassroots football - like most walks of life - has been devastating financially.

"I have numerous pairs of old boots which, being a bit of a hoarder, I've collected. They are really brand new. They could be used in a much better way - for growing kids, or adults.

"For kids, this is a key area. Parents will know their kids' feet grow so quickly the boot doesn't last long enough during a season, let alone for multiple seasons."

James hopes small changes like this can help towards a "better future for the environment".

"It's been calculated a million pairs of recycled boots are equivalent to a million households worth of energy for a year," he added. "And CO2 emissions are a big part of global warming."

James, 50, is in the process of moving to an environmentally friendly house and is looking at ways to use as much renewable energy as possible.

"It was difficult back in 2008, when I was recycling energy from my car, to see the bigger picture - but individuals can make a big difference. Along with football boots, whether its solar energy, recycled energy, anything we can do has to be important," he said.

"Recycling clothing is one of my big things at the moment. If you ever see me wearing old stuff, it's not a fashion trend. It's more about the fact I just want to reuse the clothing as much as I can.

"I will paint over old paintings rather than going out and buying knew canvases."

And James is keen for football to "do better" on the issue.

"There is stuff football can do... whether or not we could see a recycled kit one year, that would be nice," he said.