Manchester City will open new contract talks with Raheem Sterling this summer despite the 26-year-old England forward losing his place in the side in recent weeks. (Telegraph - subscription required)

Argentina striker Sergio Aguero, 32, has agreed a two-year deal to join Barcelona when his Manchester City contract expires at the end of the season. (Guardian)

Arsenal defender Sead Kolasinac, 27, is set to leave the club this summer, with Schalke and Lazio leading the chase for the Bosnia and Herzegovina international. (Football.London)

Arsenal and Aston Villa have renewed their interest in Norwich's 24-year-old Argentine playmaker Emiliano Buendia, who is valued from £35m to £40m. (Sky Sports)

Wolves are in talks with former Benfica manager Bruno Lage about succeeding fellow Portuguese Nuno Espirito Santo, who will step down after Sunday's game against Manchester United. (Guardian)

Wolves are looking at Portuguese Paulo Fonseca, who will leave Roma this summer. (Mirror)

Should environmental concerns become a key factor in the staging of major matches?

Tottenham will try to persuade Leicester boss Brendan Rodgers, 48, to become their new manager if the Foxes fail to qualify for the Champions League. (Sun)

Tottenham's on-loan Wales winger Gareth Bale, 31, is considering retiring when his Real Madrid contract expires at the end of next season. (AS)

Leeds are expecting to receive offers for 27-year-old Spain defender Diego Llorente this summer but have no intention of selling him. (Football Insider)

Leicester are leading the race for Celtic striker Odsonne Edouard, although Arsenal, Newcastle and Aston Villa are also keen on the 23-year-old Frenchman. (Daily Record)

Incoming Roma boss Jose Mourinho has warned Manchester United that he will not pay over the odds for 32-year-old Serbia midfielder Nemanja Matic. (Corriere dello Sport via Mirror) 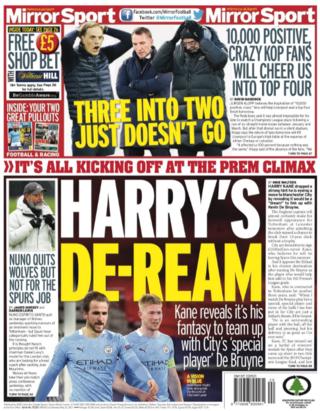