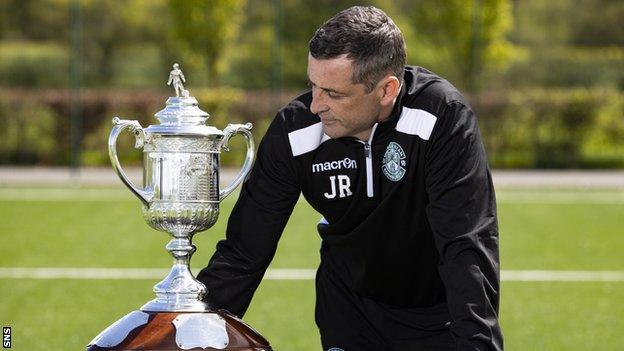 In a previous life as author of football books for children, Hibernian head coach Jack Ross might have struggled to come up with a plot to rival the real life story he's now living in.

A season that began with his former chief executive, Leeann Dempster, talking in foreboding tones about the near-certainty of the coronavirus-related demise of some major football clubs in this country could now end in glory against St Johnstone in Saturday's Scottish Cup final.

Hibs finished third in the Premiership. In all competitions they have won 55% of their games, their best return since 1974-75. Ross had not yet been born. "That's a good one, it might encourage me to leave after Saturday's game," he jokes.

They have had admiring glances, and some solid offers, for a number of their players. Unquestionably they are a club on the up. All they need is the fairytale of a trophy to round it all off.

Speaking about his days dabbling with a pen as a footballer coming to the end of his playing days, Ross talked about the characters he created. Callum the Courageous Keeper was a yarn about how a kid dealt with bullying in the school yard. Archie the Adventurous Winger focused more on healthy eating. He calls it doodling while on summer holidays but language has always fascinated him, he says.

"I've huge admiration for those who use it well, be it journalists or songwriters or whoever," he explains. "I used to take notepads with me on holiday and I'd just write and I really enjoyed it. It was a nice distraction. A hobby. It was lovely to see the books in print."

If he ever decides to dabble again then a victory over St Johnstone on Saturday will give him a muse or two to work with. After taking over when the club was sitting in eighth place in the Premiership he's always said that working on the culture of the club was his biggest challenge.

"There was stability here but there was inconsistency as well and that inconsistency had been accepted a little bit," he says. "There was a mentality that win-one, draw-one, lose-one was okay. You'll get inconsistency, but it's not okay. Slowly but surely we're shifting the mindset."

There's been turbulence, of course. The League Cup semi-final loss to St Johnstone was the worst day by far. The way that Hibs fell in a heap in the second half against Saturday's cup final opponents left him raging.

For a man who had already hit a metaphorical crossbar with two defeats at Wembley as manager of Sunderland and a Scottish Cup semi-final loss to Hearts at Hampden, here was another near-miss that had to be processed.

"In the second half that day we were really, really poor," he laments. "Desperately poor. It was the angriest I've been with the players. They'll tell you there's only been a few times when they've seen me really angry. We all had to reflect.

"You have a choice at that point. You don't want to go back and experience that disappointment again. You dust yourself down. It was an acute reminder that whenever you let your standards slip you become very average. It was sore. Defeats will happen but the manner of it was tough."

He finds life as a manager a little more natural to him than his days as a footballer. "Strangely enough, when I was a player I wrestled more with it being the right fit for me, but management has always felt more comfortable," he explains.

"As a player, I was released as a teenager by Dundee and then dropped back to playing juniors and at that time I didn't know if I'd ever be a pro again. Thankfully, I did, but I always had that element of doubt.

"I think that doubt haunts a lot of pro footballers if I'm being perfectly honest, but management has felt different. I don't want to sound arrogant, I'm not saying I'm the best, far from it, but it's felt more of a good fit for me."

This cup final is going to provide a hell of a story no matter the outcome. Ross sings the praises of his counterpart, Callum Davidson, and all that's he's done this season. League Cup final winner Davidson has had the better of the head-to-heads, not least on the tumultuous day at Hampden that caused such pain to the Hibs men.

Ross and his players seemed to learn the lesson the next time they visited Hampden, seizing control of their semi-final against Dundee United early on and playing with an intensity that was absent for too long in the loss to St Johnstone.

The head coach has signed well and has improved many of the ones he inherited. There's a conviction about them in attack that can, on its day, scare any side in the country. Martin Boyle, Kevin Nisbet and Christian Doidge - the blessed trinity of Easter Road - have scored 46 goals between them in all competitions this season.

The downside of doing well is that your players get coveted by others and there's been plenty of that for Ross to contend with. "I'd prefer not to lose any of them, but it goes with the territory," he says. The teenager Josh Doig, released by Hearts at 16, is the latest one to attract attention of clubs in England.

"The thing that Josh has, and that I didn't have as a player, is his strength of mindset," Ross beams. "He's such a nice boy, really humble, polite, still comes and asks if he can leave the training ground when his work is done. But he has a steel as well. To have his mindset at 18 is brilliant. You can develop resilience but others are just fortunate to have it and Josh is one of those."

Doig is one young player who has captured the imagination, Nisbet is another. From being rejected by Partick Thistle and bouncing around the lower leagues on various loan spells, Nisbet is now a Scotland international bound for the European Championship.

He will tell you straight that at Thistle he was a bad pro. Too much going out, too much unhealthy eating, too much attitude of the wrong kind. He grew up.

When he lost his father days before missing a penalty in that cup semi-final loss to Hearts the experience, personal and professional, could have crushed him. He used it as fuel. Eighteen goals this season has been a terrific return in his first season in the top division.

"Bitter isn't the right word but with age you make peace with certain things that happen in your younger life, but for Kevin it's probably still raw," Ross says. "If that's his driver, to prove people wrong who have written him off, then that's great. It's good for me that he has that fiery side to his character.

"When he first went with Scotland the question I would have had was would he be fazed by the big players around him. You just don't know how you'll settle character-wise and ability-wise and on both fronts he did well.

"Things move quickly in football and we rarely pause to take breath and look at where somebody has come from. When you do that with Kevin, struggling for full-time football not that long ago, it's incredible. He's a great example to other players who are currently going through rejection or who are trying to fight their way back up through the levels." Kevin the Comeback Kid, if he feels the urge to pick up the pad again.

How long can he keep this lot together? It's hard to say, but Ron Gordon, the owner, has said he will not be taken for a ride by English clubs trying to take liberties. Watford are rumoured to be in for Doig, Birmingham were in for Nisbet. Canute can only hold back the sea for so long.

Boyle, 15 goals for the season, is in the last months of his contract. Listening to his manager there's a concern that he might move on in the summer. They will fight it, but that's the reality of football.

Boyle would be a loss, though. Not just for his pace and creativity but for his personality. Ross speaks about his character being the thing that would be hard to replace, his energy and dynamism.

"You have to be in his company to know how important he is to us," Ross says of the Australia international. "An infectious enthusiasm, a real pleasure to work with. Now, sometimes I have to turn the other way when he's in full flow, but I don't mind that. He's a real presence around the place.

"We don't want to lose him but that's part of the jigsaw puzzle. He'd be a hugely difficult player to replace. We've already recruited well in bringing in young Daniel MacKay - a quick wide player - but that wasn't done with the intention of replacing Martin, it was done to supplement him. We're preparing for the potential eventuality of him leaving, we have to, but we want him to stay."

That's for the future. In the here and now they have a day to savour, all of them together. There will not be fans, sadly, but Ross says his players will feel their power nonetheless. He knows they are out there in their thousands, watching and praying. A very good season could become a great one.

"This is the dream you have as a child," he adds. Something to write about for sure.