St Johnstone completed the greatest season in their history by lifting the Scottish Cup to complete a remarkable domestic cup double.

But is it - pound for pound - the best ever campaign in Scottish football history?

With a bottom-half of the Premiership budget and in Callum Davidson's first season as a manager, they finished fifth in the league to qualify for Europe as well as clinching the League Cup and Scottish Cup.

It takes something special to become a standout side in the same season that Rangers completed an unbeaten league campaign, but that is what the Perth club have managed. So where does their achievement rank?

There have been some phenomenal post-war campaigns in Scottish football, with Celtic, Rangers and Aberdeen leading the way.

The pinnacle for Celtic was the 1967 campaign where they won every domestic trophy on offer, as well as the famous European Cup triumph in Lisbon. Then, 50 years later, Brendan Rodgers' Celtic completed a domestic treble without losing a single game, albeit they were disappointing in Europe.

Rangers' 1992-93 season stands out among the club's greatest across all competitions as they completed a domestic treble, while being minutes away from reaching the inaugural Champions League final, losing out to controversial winners Marseille.

St Johnstone's season may not have a European dimension to it, but the greater influence of money in football's current era gives context to the club's heroics.

Whether in Europe or domestically, the gulf between the biggest clubs and provincial ones like St Johnstone has never been wider, as evidence by Celtic's haul of 12 straight trophies prior to this campaign.

The Perth club's turnover is roughly 15 times smaller than Celtic's and about half of their Scottish Cup final opponents Hibernian.

In February last year, chairman Steve Brown instigated a cut in their wage bill, describing their budget as "unsustainable". Eighteen months on and they have won two trophies and finished fifth in the league. 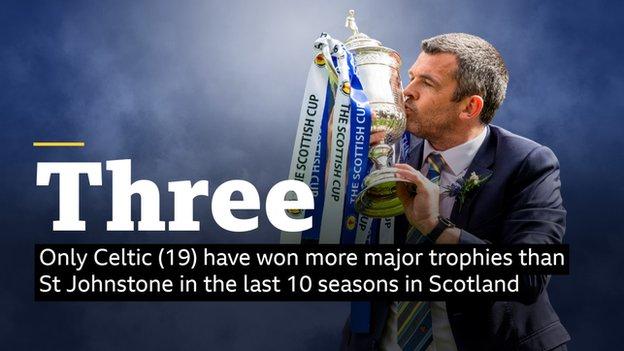 So how have they done it?

Their achievement is all the more remarkable considering where the club came from under rookie manager Davidson.

They won just four of their first 20 league games this season, losing 11, and were bottom of the league in October, so how did they turn it around?

Only Celtic, Rangers, and Aberdeen have beaten Davidson's side since the turn of the year as they have racked up 12 wins and eight draws from their past 24 games.

Despite those statistics suggesting a dramatic improvement in the latter part of the season, their early stutters were down to poor finishing in front of goal, combined with the odd defensive error. Through good coaching and slight tweaks rather than a major overhaul, those losses have turned into draws and wins.

That's borne out by the fact Davidson's men are never played off the pitch - only unbeaten Rangers (twice), Celtic (twice), and Livingston have beaten them by more than one goal in the league. St Johnstone never make life easy for opponents.

Their solidity - having kept 12 clean sheets in 2021 - comes from a consistent selection, particularly at the back, where centre-backs Liam Gordon, Jason Kerr, and Jamie McCart have formed an impressive unit alongside goalkeeper Zander Clark.

And right wing-back Shaun Rooney has been a revelation since becoming first choice after Danny McNamara's return to Millwall in January, scoring on three of their four trips to Hampden.

"Everyone in the changing room has added to our success this season," captain Jason Kerr told BBC Scotland. "We've got so much depth and everyone wanted it."

"We're all together," goalkeeper Zander Clark concurred. "A lot of folk wrote us off earlier in the season, [saying we] were relegation candidates. We like that because it gives us something to go and prove people wrong. Fair play to the manager, he stuck with what he believed in and knew what we were capable of, and we've reaped the benefits."

What do the pundits say?

St Johnstone's recruitment and the way they look after players is spot on. The way they are as a club is spot on. Other clubs need to look at themselves and say, 'What do they do? We need a bit of that.'

That's three trophies now in seven years - it's ridiculous for a club of their size and budget. It's down to recruitment, team spirit and the way the manager - Davidson and Tommy Wright before him - gets the best out of every player.

This is the greatest single-season domestic achievement in the history of the Scottish game. St Johnstone, with their budget to win two cups, will we ever see the likes again?

Rangers this season are the best team in the country. They have won one trophy, St Johnstone have won two. And they've done it on a budget of tuppence ha'penny, relatively speaking. The accolade is just off the scale.