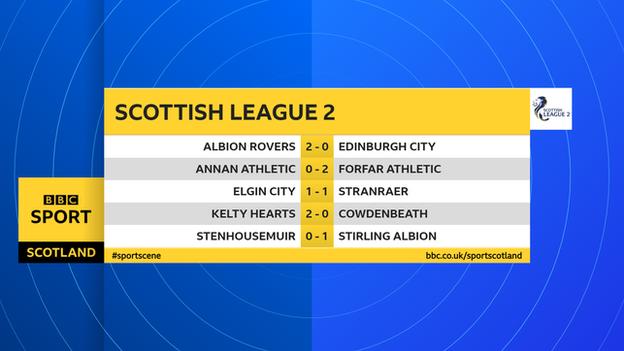 Goals in each half from midfielder Joe Cardle and defender Ross Philp secured victory for Kevin Thomson's side.

Forfar won 2-0 at Annan and Elgin City and Stranraer drew 1-1.

At Cliftonhill, Albion led through goals from Declan Byrne and Kyle Doherty, before referee Luke was unable to continue, delaying the start of the second half.

Albion's Max Wright initially stepped in to run the line before the game continued with just one assistant.

Edinburgh were awarded a second-half penalty, but Danny Handling's spot-kick was saved by Cameron Binnie.

Elgin City and Stranraer drew at Borough Briggs. Defender Darryl McHardy headed the hosts in front from a corner midway through the first half, then Grant Gallagher nodded in from a 55th-minute free-kick to level things up.