A first opening day league defeat in 24 years. Three matches without a win under new manager Ange Postecoglou. Eight games without a win on the road. Stuttering Celtic are yet to clear the clouds of last season.

Out of the Champions League at the second qualifying round stage, their attempts to wrestle back the Scottish Premiership title have suffered an early blow with the 2-1 loss to promoted Hearts at Tynecastle.

For Hearts, after 12 months out of the top flight, they returned with gusto. A first win over Celtic in three years, Robbie Neilson's side are unbeaten in five this season and 10 following on from last season.

How did Hearts get the better of Celtic? And how far is Postecoglou from solving Celtic's problems? BBC Scotland takes a look at three key talking points from the 90 minutes in the capital.

Beni Baningime made his debut in Hearts' midfield after signing from Everton on Friday and shone.

The 22-year-old boasted a passing accuracy over over 83%, won more more tackles than any other player, made the second-most interceptions, won 60% of his duels, and conceded just one foul.

Compare that to his opposite number Ismaila Soro. The Celtic midfielder won just 33% of his duels, conceded five fouls, made seven fewer successful tackles than Baningime and two fewer interceptions.

"It was a masterful performance," former Scotland midfielder John Collins said on Sportsound.

"Winning possession, being very smart, not diving into tackles, interceptions... and when you win it, what do you do with it? Celtic players were swarming round him, but he wasn't getting flustered, he had that calmness.

"He had his head up, the ball was always under control, and he played quality passes. He played with a great deal of maturity and confidence and you'll be lucky if there's a better signing in the Premiership this season." 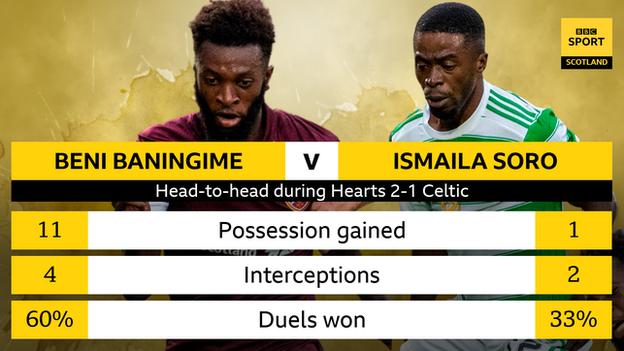 Celtic dominated possession, with 73% of the ball. Of the opening day of Scottish Premiership games, only Rangers had more (77%) in their 3-0 win over Livingston.

It was similar against Midtjylland in the Champions League, with 63% possession in both legs but all three games have yielded a total of just three goals.

Ange Postecoglou admitted his side are not dangerous enough in the final third. Liel Abada is the only attacker to score so far, with Callum McGregor and Anthony Ralston providing the others from moments of individual brilliance rather than a design of the system.

At Tynecastle, David Turnbull was Celtic's main threat with four shots - more than the wide men James Forrest and Abada combined. Odsonne Edouard had one effort on target, and two overall.

In the first half Celtic were balanced with their attacks, but in the second half they relied heavily on their left-hand side - 44.8% of their attacking play came down that side, mainly through Forrest and Greg Taylor.

Taylor had a peculiar 90 minutes. He made more interceptions than anyone else, but he, Ralston and McGregor were guilty of coughing up possession all too often.

"I felt after a chaotic first five or 10 minutes we got control," Postecoglou told BBC Scotland. "Some of our play in the middle was good but we lacked quality in the final third, we let ourselves down with our execution there.

"We had a lot of possession, but some of our crossing, our shooting, our decisions in and around the box could have been better. If we could have put more pressure on Hearts we could have got more dominance earlier."

Celtic conceded 29 league goals last season, their worst tally for five years. And their attempts so far to improve on that have not been promising.

At home against Midtjylland, they lost Nir Bitton to a first-half red card, meaning Dane Murray joined Stephen Welsh in the centre of defence, with Ralston and Taylor in the full-back roles - an average age of 21, with an 18-year-old debutant in the heart of the back four for two huge games.

That quartet played 120 minutes in Denmark on Wednesday, which persuaded Postecoglou to field new signing Carl Starfelt despite 26-year-old having just been released from a 10-day quarantine.

The Swede suffered a tough debut, starting by being beaten by Josh Ginnelly all too easily for the opening goal. But he could have been the hero for Celtic, with Craig Gordon denying him an equaliser with a spectacular save.

Former Hearts manager Craig Levein was left umimpressed. "I look at Starfelt, and okay it's his first match, but he's not a dominant centre half," he said on Sportsound. "Boyce beat him in the air in the first half half a dozen times.

"What kind of centre back is he going to be? Is he a ball playing centre half - I didn't see enough of that. Has he got pace, no - Ginnelly burned him two or three times down the side in the first half.

"Compare him to [Hearts'] John Souttar, and for me it's just night and day. John's got pace, he's a good passer, he's good in the air. Things that you can see in one match."