At the sound of the half-time whistle, Joe Hart walked to the mouth of the Celtic Park tunnel and paused to wait for Kyogo Furuhashi, the little Japanese striker only in the country a veritable wet week but a player who had created quite a storm.

The goalkeeper has been around the block in his time. He's seen a few handy players. Played with a bunch, has been beaten by a bunch.

The little hand-slap he gave Furuhashi was an acknowledgment of a terrific first 45 minutes in his new stadium, an appreciation of a talent who was at the heart of a high-energy, high-class Celtic performance, a six-goal win that could just as easily have been seven, eight, nine or 10.

The 26-year-old was kinda mesmeric. Even before he started to get on the end of passes from those around him, his movement was a blur.

Those early surges weren't picked up by his Celtic team-mates, but it was only a matter of time before they were. Ryan Christie looked like a man reborn out there. The pair of them together looked the double act of the Celtic fans dreams.

Furuhashi was a whirling dervish that Dundee did not know how to contain. Go tight or back off? Stick or twist? It didn't really matter. He should have scored after 10 minutes. His gorgeous touch found Tom Rogic, who squared it back to him, only for the striker to flash it wide. A miss, but a galvanising moment all the same.

The impact the 25,000 in the stands were having on the 11 below was obvious. Noise, encouragement, positivity, energy. The players fed off it. There was a power and a verve in this Celtic performance that we haven't seen for an awfully long time. 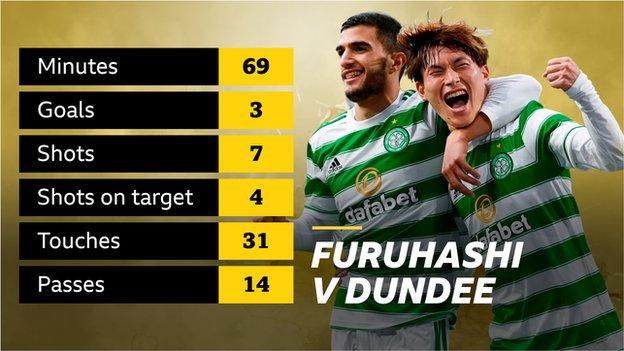 Twenty minutes in and Furuhashi scored his first. Wavelengths had been synchronised. David Turnbull to Liel Abada. The winger slid it across goal and in came Furuhashi to glance it home with his boot. Not an easy finish but an emphatic one.

One goal became two. Christie had the bit between his teeth. Back to his influential best. He motored down the left, picked out his striker and Furuhashi put it away. The timing and pace of it was excellent. The bewildered looks on the faces of the visitors was unmissable.

Seven minutes later, Furuhashi should have scored again. Inside 27 minutes he could have had four goals.

'First stirrings of Postecoglou's team could be seen'

It wasn't just his slickness that stood out, it was his defensive diligence. Just after the half-hour, he charged down Ryan Sweeney in the left corner. Just before the break, he charged down Cillian Sheridan in the right corner.

As much as his quality lit the place up, it was the sight of him defending from the front that had the Celtic fans on their feet. A player, obviously. But a worker, too.

So when Hart took a minute to say well done, it was deserved. You could say it was only Dundee, but Celtic toiled endlessly against this type of focused, honest team last season. They toiled against everybody, pretty much. This was like a snapshot of the old days. The first stirrings of what Ange Postecoglou is trying to achieve were seen.

Christie created the third for Rogic. The rain came down, the thunder started to rumble and Celtic pressed on. Furuhashi slipped when shooting. Had he kept his feet, a goal was more probable than not, but that third of his came soon enough.

The defence-splitting pass from Christie was sumptuous, the finish from Furuhashi was lethal. Three goals here, one goal midweek. Four in two games in a new team, in a new country, while trying to learn the basics of a new language. Thirty-one touches, seven shots, three goals. Outstanding.

He was taken off straight after and ovation was as long as it was earned. Odsonne Edouard came on for him in a passing of the torch moment that few would have missed.

In this attacking riot there was a fifth for Anthony Ralston, a brilliant finish that made it two in a week for a guy Celtic didn't want a piece of for the longest time, and a sixth for Edouard, a man who has given much to the club and who's probably not got much more left in him before he leaves. It was a penalty earned by Abada, the teenager who turned in another stellar performance.

Six did not flatter Celtic. Against the best sides they still have much work to do in defence, but in the tempest of Glasgow's east end, they put on a mighty show going forward.

Furuhashi was the story, but the support cast were relentless. A day that started with a rumoured protest outside the ground ended with sustained approval inside it. Optimism for the home support. It's been a while.