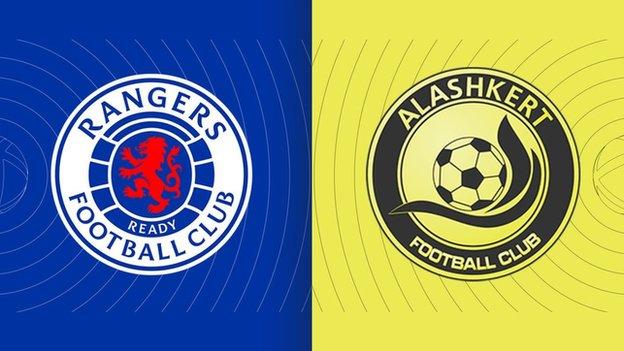 The last time the Armenian champions visited Glasgow in 2018, they were beaten 3-0 by a Celtic side who played 79 minutes with a man short.

On Thursday, Rangers had John Lundstram sent off before Morelos secured a narrow advantage to take to Yerevan.

"The first-half performance was nowhere where I needed it," the manager said.

"The players listened to what I had to say at half-time and we got a reaction and went on to win, but we should have made this game so much more comfortable.

"We're in competitions and we're at a club where you can't afford to be where we are right now."

Having lost home and away to Malmo in Champions League qualifying, and to Dundee United in the Scottish Premiership, the momentum expected from last season's first league title in 10 years is in danger of being squandered by Gerrard's side.

However, Morelos' reliability on the continental stage puts them within touching distance of the Europa League group stage for the fourth season running.

It was Rangers who created the early chances, with Ianis Hagi firing wide and Ryan Kent's shot clipping the crossbar.

However, fellow midfielder Lundstram was sent off just before the break for his second yellow card within the space of 10 minutes.

It could have swung the momentum in favour of the side who needed an extra-time goal to dispose of Wales' Connah's Quay Nomads in Champions League qualifying.

Instead, the half-time introduction of Scott Wright in place of Kent brought Morelos more into the play and the Colombian had an overhead kick cleared from in front of goal - then sent a header just wide.

When captain James Tavernier's ball over the top of the visiting defence put Morelos in the clear, it was third time lucky for the striker.

With Alashkert failing to muster an attempt on target despite their man advantage, Rangers should head into Thursday's return leg confident of progress.

Rangers manager Steven Gerrard: "I've got confidence and belief we can get going and restart and show we can get back to the form we need - but we need to wake up now.

"Tonight wasn't really about tactics or blocks, the players know all the information and solutions, it was way beyond tactics in the first half.