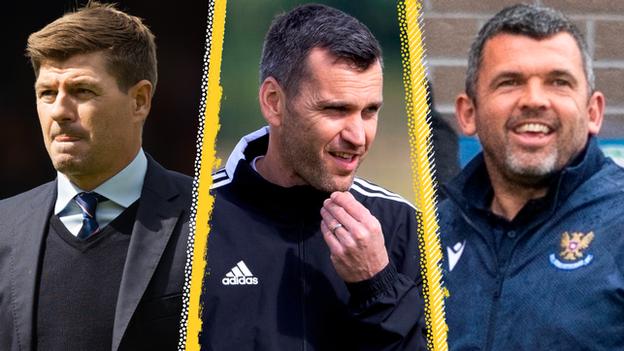 For the first time, Scotland could have four clubs playing European group-stage football, with the quartet each standing one tie away from reaching that target.

Celtic and Rangers are guaranteed continental competition until December, with the former in good shape to claim a Europa League group stage place after a 2-0 first leg win over AZ Alkmaar.

BBC Scotland assesses what lies in wait on Thursday.

Aiming for a fourth successive Europa League group stage campaign, Rangers host Armenian side Alashkert in the first leg of their play-off.

Steven Gerrard's side have reached the last 16 of the tournament two seasons in a row but after the Champions League qualifying loss to Malmo, Rangers have lost their past three European matches, Slavia Prague having won at Ibrox in March.

Like Rangers, champions Alashkert have had a slow start to their Armenian Premier League defence, losing their opening two games. But they overcame Kazakhstan's Kairat to set up this tie. Following a goalless first leg, Portuguese forward Jose Embalo scored twice in the 3-2 home win, with Aleksandar Glisic netting the extra-time winner.

And, win or lose, they will become the first Armenian side to play in a European group stage, whether it's in the Europa or Conference League.

Far to travel as Aberdeen look to bounce back

Aberdeen face an arduous trip of around 3,500 miles to the eastern boundary of Europe for the first leg of their play-off with Qarabag of Azerbaijan.

Qarabag are no strangers to Scotland, having lost 1-0 over two legs to Celtic in a 2015 Champions League qualifier. They finished second in their domestic league last season and boast decent pedigree as Europa League group stage regulars.

They have overcome Israel's Ashdod and Cypriots Limassol so far, with 1-0 and 2-1 aggregate victories, and began the domestic league season with a 1-1 draw away to Zira on Sunday.

"Our aim will be to go over there and win, but worse-case scenario would be a draw. Losing isn't really on the agenda," said Jay Emmanuel-Thomas, who scored his first Aberdeen goal in Sunday's League Cup loss at Raith Rovers.

"We've had a great run so far and there's just two more hurdles to go. Playing in Europe is a key thing for a lot of players, playing against players at the top of their fields in the countries they play in."

Up and down LASK await St Johnstone

An hour after Aberdeen kick off in Azerbaijan, St Johnstone will be starting their play-off against LASK in Austria.

Fourth in the Austrian Bundesliga last season, LASK are currently fifth after one win and two draws from their opening four games. However, they hammered Serbians Vojvodina 7-1 on aggregate in the last round.

And last term, they featured in the Europa League group stage and held Tottenham to a 3-3 draw in Linz.

St Johnstone showed up well in the away leg of their Europa League tie with Galatasaray, drawing 1-1, but could not finish the job at McDiarmid Park, going down 4-2 in Perth.

And Callum Davidson's side struggled past Arbroath on penalties as they started the defence of the League Cup while LASK were losing at home to league opponents Sturm Graz.