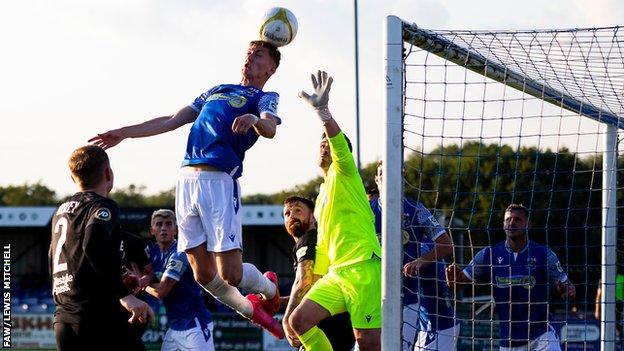 Newtown, whose play-off final win at the Oval 13 weeks ago secured European qualification, took full advantage in the second half to a secure a deserved victory.

Met boss Christian Edwards confirmed earlier in the week he will be stepping down at the end of the season after 13 years in charge of the Archers.

Cefn Druids 1-4 Barry Town United: Kayne McLaggon and Clayton Green scored two goals apiece as Barry Town came from behind to win at Cefn Druids and secure their first victory of the season.

Niall McGuinness' side - still seeking their first win of the season - went ahead on the half-hour mark through George Harry. McLaggon levelled for Barry eight minutes later.

Green made it 2-1 on 71 minutes with McLaggon adding his second four minutes later. Green sealed the win over Druids, who are bottom of the table.

Flint Town United 1-0 Aberystwyth Town: Neil Gibson's Flint continued their impressive start to the season, securing a third successive win with a late victory over Aberystwyth. Alex Jones' stoppage-time goal won it for the Silkmen, who are top the Cymru Premier on goal difference.

Penybont 1-1 Connah's Quay Nomads: Champions Connah's Quay Nomads dropped their first points of the season as they were held to a 1-1 draw by Penybont. Nomads, who clinched their second Cymru Premier title with victory at Penybont in May, fell behind to Lewis Harling's goal on 20 minutes but Byron Harrison's first goal for Andy Morrison's side saw them secure a point.