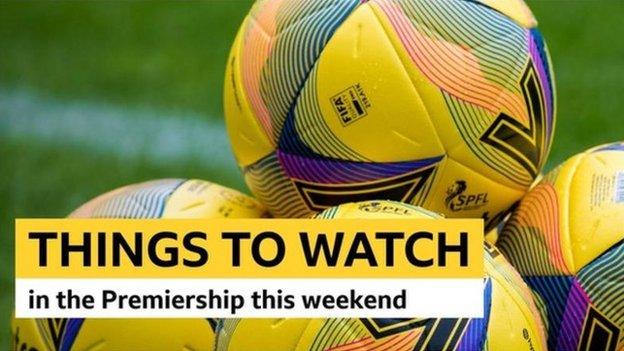 Rangers and Celtic meet in Sunday's Old Firm derby, with neither of them occupying the top three places in the Scottish Premiership.

Instead, leaders Hibernian are trying to hold off Edinburgh rivals Hearts and an Aberdeen side smarting from Thursday's Europa Conference League exit.

Livingston also go in search of their first point of the season and a glut of new signings get ready to make their debuts on the last weekend before the international break.

Top versus bottom at Easter Road

Despite a Conference League defeat by Croatia's Rijeka, Hibs head coach Jack Ross has declared himself pleased with the way his table-topping side have started the season.

On Saturday, they host a Livingston side still seeking their first point of the season. After an opening day loss to Rangers, they have twice passed up the lead to lose to Aberdeen and Motherwell. And they will still be missing captain Marvin Bartley, who completes the last match of his suspension this weekend.

Last season, Hibs hammered Livingston 4-1 away, only to then lose 3-0 at home on the return trip. The last two meetings have been a draw and a 2-1 home win for Hibs.

Thursday's Conference League defeat by Azerbaijan's Qarabag has cost Aberdeen a reported £4m, but it hasn't stopped them continuing to be busy in the transfer market.

Forward Marley Watkins has signed a two-year deal after impressing on loan from Bristol City last season, while Austin Samuels is also added to Aberdeen's strike force on a season-long loan from Wolverhampton Wanderers.

Newcastle United midfielder Matthew Longstaff has also moved on loan, while Dons manager Stephen Glass is keen to add defensive cover after Andrew Considine was ruled out until the new year and former Rangers centre-back David Bates appears close to making a permanent move from Hamburg.

Ross County, too, will likely unveil defender Jack Baldwin after the 28-year-old Englishman travelled north from Bristol Rovers. He has made more than 300 appearances across spells at six clubs in his homeland.

The Highlanders are still looking for their first Premiership win of the season, having lost their last two.

Who comes out on top at Ibrox?

Not since 1 September 2019 have Celtic won at Ibrox. Less than two years ago may not be that long to many, but for Celtic fans it feels like an eternity.

Although they won the League Cup final in December that year, since then they've faced their old foes six times, losing five of them, the last of which was a 4-1 humbling in Govan in May. With the league title, which had made its home at Celtic Park for nine years in a row, also disappearing across the city, it's fair to say Celtic have been very much second best in Glasgow recently.

They used to have 7,000 fans packing the Broomloan Stand to help them on these trips. That was reduced to 700 and on Sunday they will have no-one there at all with no away tickets being made available. That was the case last season with the stands closed, but this time a capacity Ibrox crowd will be staring them down.

However, many feel Ange Postecoglou's side are slight favourites based on recent form. Rangers have looked shaky - knocked out of the Champions League by Sweden's Malmo and scraping past Armenia's Alashkert 1-0 on aggregate in the Europa League.

Coupled with a league loss to Dundee United, and positive Covid cases ruling a number of players and manager Steven Gerrard out of Thursday's trip across Europe, the champions are looking vulnerable.

Meanwhile, Celtic have shrugged off a less-than-impressive start themselves to knock in 15 goals in their last three domestic games.

Eight times out of the last 10, the winner of the first Old Firm derby of the season has gone on to win the title. With it also being Postecoglou's first experience of the clash, and the first game in front of supporters since December 2019, all the ingredients are there for another enthralling 90 minutes.