The group stage of what promises to be a fascinating Champions League season gets under way this week.

Holders Chelsea are part of an English quartet in the mix, along with last season's runners-up Manchester City, Liverpool and Manchester United.

Intriguingly, the latter will have the competition's record goalscorer Cristiano Ronaldo in their side.

And for the first time, Lionel Messi will play for someone other than Barcelona in the tournament.

His new club Paris St-Germain will begin as one of the favourites following a summer that has seen them recruit a number of seasoned Champions League campaigners.

But who else will be aiming for glory in St Petersburg in May? Which other players should you look out for? And can we expect another English winner this season? BBC Sport tries to provide the answers. 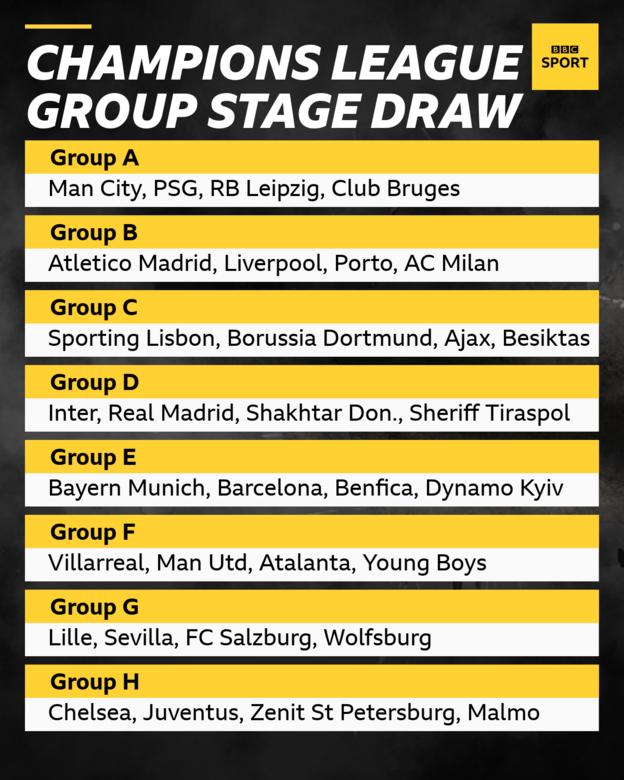 Do Chelsea lead the English challenge?

Ominously, the Blues appear even stronger going into this year's tournament, having recruited striker Romelu Lukaku, a scorer of 13 goals in 27 Champions League matches and more than 300 in his club career, and midfielder Saul Niguez, a runner-up in Europe's premier club competition with Atletico Madrid in 2016.

Drawn in a group with Juventus, Zenit St Petersburg and Malmo, Chelsea have been given a 92% chance of reaching the knockout rounds by data experts Nielsen Gracenote, which is second best behind Real Madrid.

Manchester City are not far behind on 89%, although they face a tough task in Group A, which also includes a star-studded PSG, RB Leipzig and Bruges.

Pep Guardiola has strengthened with the British-record £100m signing of Jack Grealish, but has lost Sergio Aguero - a man with 78 games and 41 goals in the Champions League to his name.

Liverpool continue to rely on the core of players that led them to Champions League glory in 2019 and face arguably the toughest group of all the English sides, being drawn against Spanish champions Atletico Madrid, Portuguese Primeira Liga runners-up Porto and Italy's seven-time European champions AC Milan.

It was this draw that led to a drop of 10% in their chances of reaching the knockout rounds according to Nielsen Gracenote, to 75% - the lowest of the four English sides.

And then there are Manchester United, looking to at least avoid a group-stage exit for a second successive season.

The Red Devils have arguably the easiest pathway to the knockout rounds of all four Premier League sides, although Group F does pit them against the side that beat them on penalties in last season's Europa League final, Villarreal.

They now have in their arsenal arguably the Champions League's most potent weapon in Ronaldo, who holds the record for most goals in the competition (135) and most assists (42) and has five winners' medals, his first coming in 2008 - the last time United won the tournament.

Ronaldo's move to Old Trafford also sets up an intriguing continuation of his personal battle for records and honours with Messi.

Messi and co aim to inspire PSG to glory

Messi's move from Barcelona to the French capital was the transfer story of the summer and his arrival will give PSG hope of finally claiming Europe's top prize.

The 34-year-old Argentine, who has 120 Champions League goals in 149 games as part of a career that has seen him find the net close to 700 times, is not the only notable recruit by the French club.

Centre-back Sergio Ramos brings four winners' medals and 129 Champions League appearances with him from Real Madrid, Georginio Wijnaldum has won it with Liverpool, Gianluigi Donnarumma has just been named player of Euro 2020 with Italy (more on that in a bit) and Achraf Hakimi is one of the highest-rated full-backs in the world.

What state are the Spanish clubs in?

It has certainly been a tough summer for Barcelona, who lost talisman Messi amid a perilous financial situation that meant they could only register new signings such as Memphis Depay and Eric Garcia after defender Gerard Pique agreed to a wage cut to comply with salary cap rules.

They still have talent in the ranks, not least in young midfielder Pedri, and should be competitive, as suggested by Gracenote giving them an 85% chance of getting out of Group E. But German champions Bayern Munich, Benfica and Dinamo Kiev won't give them an easy ride.

Real Madrid also have financial worries, but they have not been as costly to them this summer as their El Clasico rival, although Ramos is clearly a loss.

They have recruited well in two-time Champions League winner David Alaba from Bayern Munich and highly rated France midfielder Eduardo Camavinga from Rennes and will hope to wring every last drop out of Luka Modric, Karim Benzema and maybe even Gareth Bale.

Gracenote gives them a competition-high of 93% to qualify from a group also containing a weakened Inter Milan, Shakhtar Donetsk and Sheriff Tiraspol.

There are seemingly few concerns for Atletico Madrid right now. The Spanish champions are in theory stronger this season than last, with Antoine Griezmann returning to the club from Barcelona along with the signing of talented South American duo Rodrigo de Paul and Matheus Cunha.

As mentioned earlier, their group is a tricky one, though.

Spain's other entrant, Sevilla, could be one to watch. A group featuring Lille, Red Bull Salzburg and Wolfsburg looks winnable and they were competitive last season in reaching the last 16.

As they have in the past, Bayern Munich's solution to renewing themselves has been to plunder their nearest rival.

Borussia Dortmund have been victims before, but this time it is RB Leipzig who have lost their manager Julian Nagelsmann, captain Marcel Sabitzer and top defender Dayot Upamecano to Bayern.

They should certainly improve the German champions, having helped Leipzig to the last 16 and semi-finals of the Champions League in recent seasons.

As for Leipzig, they suffered most from the draw, according to Gracenote, with their chances of reaching the knockout phase reduced by 17% after pulling out both PSG and Manchester City.

Dortmund have lost Jadon Sancho but kept Erling Braut Haaland, and it feels as if Group C - also containing Portuguese champions Sporting Lisbon, Dutch champions Ajax and Turkish side Besiktas - is completely up for grabs.

What a summer it was for Italian sport, with their Euros win at Wembley testament to their talent and tactical nous. Roberto Mancini's side are now 37 matches unbeaten - the longest such run in international football.

But will this translate into club success in the Champions League?

Inter Milan were the top Italian side last season, and have Euro 2020 star Nicolo Barella in their ranks, but they look significantly weaker having lost Hakimi and Lukaku.

Juventus have brought in midfielder Manuel Locatelli, who impressed in the summer tournament, but will undoubtedly suffer for the loss of Ronaldo, top scorer in Serie A last season.

Atalanta are talented but lack pedigree in the competition, while AC Milan have the pedigree but maybe not the talent, especially with Euro 2020 goalkeeping hero Donnarumma no longer at the club.