"That's a challenge for me to improve on cup competitions and get a group that's capable of being better and giving our fans what they deserve, which is more trophies - not just one out of nine."

Those were the words of Steven Gerrard in the wake of last season's Scottish Cup quarter-final exit to St Johnstone, the fifth time in his tenure Rangers have failed to make a final.

The league title has been returned and - Champions League exit aside - Europe has been a marker of progress.

But Gerrard will not be satisfied until Rangers hold a position of dominance in Scotland and to do that, they need to be claiming domestic cups with regularity.

Wednesday's League Cup quarter-final against Livingston, therefore, takes on huge significance. The last eight is a hurdle Rangers have fallen at four times in the past three seasons, and they can ill afford to do so again.

Common themes emerge when examining Rangers' cup defeats in the past three seasons. The first is a lack of punch in attack. In four of their six cup exits under Gerrard, they have failed to score despite averaging 14 shots on target in those games.

Most teams concentrate on closing out space in the final third, and Rangers have often lacked the intensity and craft to unlock the door, sometimes resorting to speculative crosses.

Despite that average of 14 shots, they have only tested the goalkeeper 4.5 times on average. Alfredo Morelos has missed two of those games when depth up top was an issue, so there are some mitigating factors.

But rather than wastefulness in front of goal - like against Celtic in the final of the League Cup in 2019 - the problem has often been the creation of quality chances against teams set up defensively.

That was also an issue in the league at times in Gerrard's first two seasons, but was almost never a problem in the Premiership last term. 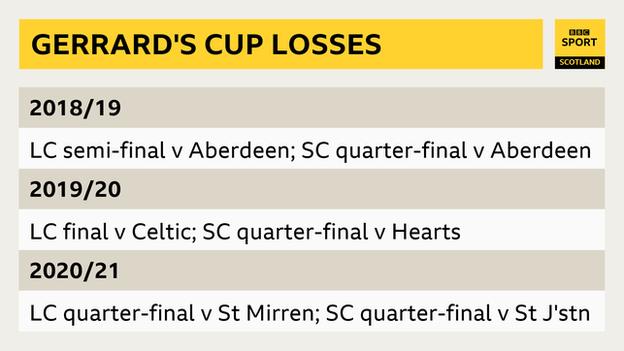 The cup defeats by St Mirren and St Johnstone last season were shocking because Rangers were flying in the league and had buried some of the systemic issues that had held them back domestically in previous years.

What undid them in both ties was - ultimately - scoring late goals. Steven Davis scored an 88th-minute equaliser in the League Cup quarter-final tie as extra-time loomed, but they switched off from a cross into the box, and Conor McCarthy followed up Richard Tait's header to win it.

Then in the Scottish Cup, James Tavernier's goal three minutes from the end of extra time looked to be the goal that dismissed St Johnstone's challenge at Ibrox, only for goalkeeper Zander Clark to rise unmarked at a corner and flick on for Chris Kane to prod home an equaliser at the death. Rangers went on to lose on penalties.

Twice at crucial times Rangers - usually solid at defending their own box from aerial threats - switched off at crossed balls.

Warning signs, but no panic

The worry for Rangers before the visit of Livingston is the issues in those cup defeats are similar to those they have experienced at the beginning of this campaign.

Firstly, their sharpness in the box has not been up to the same standard this season. Ryan Kent has been out of form and is now injured - and he is so often the man to break up patterns of play and create opportunities.

This season so far Rangers have scored 19 goals in 12 games, five of which were against struggling Championship outfit Dunfermline. Last term they had scored 33 times after the same number of games.

The opposition on those runs varies of course, but a lack of bite at the top end of the pitch will be a concern against a Livingston side who kept Celtic at bay on Sunday and have a history of frustrating sides.

"We haven't got a leading goalscorer jumping out or a leading assister," Gerrard said after Sunday's 1-1 draw with Motherwell. "That's what we're going to need.

"I'll challenge all the boys in the final third and hopefully we can become more of a killer team. Because we're getting there on too many occasions and not rewarding ourselves and that's a bit of a concern right now."

While the lapses against St Johnstone and St Mirren last term were aberrations in an otherwise excellent season, a fragility in defence has crept in at the start of the current campaign, which comes with a warning for the Livingston game.

Rangers have conceded seven more goals in all competitions than at the same stage last term and have managed two clean sheets in their first six league games. After six league games last year, they hadn't conceded a single goal.

"We've got to defend situations better," Gerrard said on Sunday. "We got a lot of praise last year for being really tough to play against. Their [Motherwell] goal comes from us being flaky. We could have got out wide quicker and dealt with the situation.

"It's been mentioned now. We'll see what type of reaction we get. Because if you keep having those moments, at the end of the season you won't get what you're looking for."

While these issues pose a problem for Gerrard, Wednesday is the perfect chance to put them right. Rangers beat Livingston 3-0 on the opening day of the season and it is far from time to panic with results still positive.

Seeing off a stubborn, well-organised opponent to set up a Hampden semi-final would be a promising indication that Rangers' cup hoodoo, and underwhelming start, are only temporary.