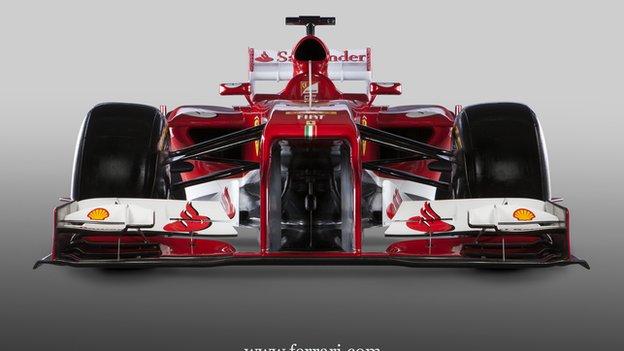 Ferrari have unveiled their new Formula 1 car admitting that they have to change their recent trend and perform from the start of the season.

Fernando Alonso's 2012 title campaign was hindered by a car that started the season 1.5 seconds off the pace. He lost out on the title by three points.

Team boss Stefano Domenicali said: "The key objective we have is of immediately delivering a competitive car."

"There are some very positive aspects of the new Ferrari - and some that I'm not quite as excited about.

"The rear-end treatment, from the back of the engine, looks like a positive step forward.

"I was very critical of their car in that area last year - it was messy, with radiator outlets disrupting the airflow.

"It's much cleaner this year, with a much more aggressive treatment of the 'coke-bottle' area where the bodywork sweeps in between the rear wheels, an area they neglected in 2012. And it looks as if they have a very small gearbox, because the bodywork at the back is very low.

"That's all good for keeping the airflow as effective as possible in a crucial area and it looks like a big step forward.

"Forward of that, I'm less sure. The coke-bottle starts early, which is a very aggressive pursuit of downforce, but can lead to problems. I might have stayed clear of that and I think Ferrari might be the only team doing that.

"I looked at the new McLaren and saw a lot of positive points. The list of obvious gains is smaller on the Ferrari but we'll have to see how it goes on the track."

Alonso said the big teams will dominate and Ferrari "have to be one of them".

The Spaniard, 31, said he did not expect a repeat of last season, when seven drivers from seven different teams won the first seven races.

"It will be very difficult to repeat what we saw last year with seven winners in the first seven races," he said.

"I think it was a one-off as a result of the regulation changes [banning exhaust-blown diffusers]. Now, with things a bit more stabilised, we saw at the end of the season the top teams emerge and so I think it will be highly unlikely we will have seven races and seven winners.

"There will be three teams who win all the races and we have to be one of those teams."

Alonso lost out last year in an intense battle with Red Bull's Sebastian Vettel, the second time in three years he and Ferrari had narrowly been beaten by the German.

Ferrari have restructured the team and changed their approach to aerodynamic design work in the wake of problems last year.

The wind tunnel at the Maranello factory gave confusing results and this has been taken off line for improvement. The new F138 car has been designed exclusively using the former Toyota F1 tunnel in Cologne.

Domenicali said: "Unfortunately in recent years we have at the beginning of the winter unfortunately not been able to be right on top of what we are doing.

"We have tried to look at our organisation to be much more effective in the preparations over the coming week."

"We have come from a season that has been intense to say the least. To come second at the last race is always difficult.

"But we have already forgotten those things which left us with regret last year and we have started improving on the positive aspects of 2012, such as reliability and strategy during the races.

"There are plenty of things that allow us to look forward to the new season."

He said the first pre-season test in Jerez, Spain, next week would "not be to get performance immediately but to check out the things we have developed in our offices".

Alonso is skipping that test and leaving the work to team-mate Felipe Massa and development driver Pedro de la Rosa before starting his pre-season driving work at the second four-day pre-season test in Barcelona, which starts on 19 February.

"I will follow the tests with great interest and all the information that comes back from Jerez of course I will be looking at," Alonso said. "In these next few weeks I will certainly be concentrating on preparing for the championship.

"I think it is right to step back and prepare a bit so I am 100% from [the first race in] Australia right through to [the last in] Brazil.

"We are lucky in this team to have a really good entente - we trust each other implicitly. Pedro and Felipe [and me], we are one person and the same."