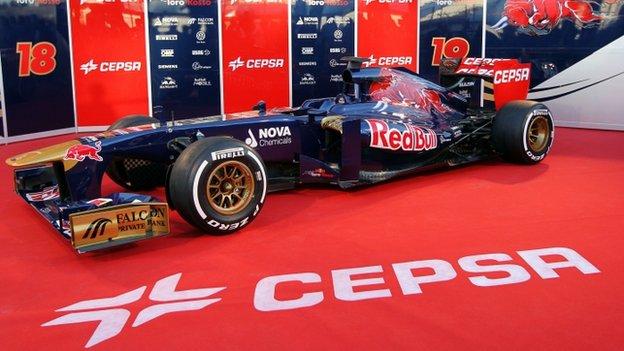 Toro Rosso have launched their new car with the ambitious target of moving up to sixth place in the constructors' championship this year.

Red Bull's junior team were ninth in 2012, occupying a no-man's-land between the midfield and the three backmarker teams.

Team boss Franz Tost said: "The team has worked with a very high level of effort to come up with a great car and meet the high level of expectations."

"The most noticeable change to this year's car is that undercut between the sidepods and the floor is less aggressive than it has been for the last two years. The old design was better for straight-line speed but worse for overall downforce, so the new one should be a step forward.

"They've fitted a McLaren-style exhaust for aerodynamic effect. Overall the car looks like a nice, tidy package and a good step forward."

Tost said of the two latest Red Bull protégés to make it into Formula 1: "Both drivers did a really good job last year, and I'm convinced if we supply them with a good car they'll come up with surprise results."

They are hoping to impress sufficiently to be considered as a partner for triple world champion Sebastian Vettel at the senior team in 2014, if Red Bull decide not to continue with Mark Webber or the Australian chooses to move on.

The car is the first to be produced under the new technical leadership of Englishman James Key, formerly of Sauber, for whom last year he produced one of the best cars of the year.

The Toro Rosso is Backmarkers Caterham and Marussia will take the wraps off their cars ahead of the start of pre-season testing in Jerez on Tuesday morning.

The Williams will be the final car to break cover, at the second test in Barcelona in two weeks' time. They are attending this week's first test but with a 2012 car fitted with 2013 development parts.